Triton’s Treasure is an underwater fantasy themed video slot. Trion is a merman who originates in Greek mythology as the son of Poseidon and Amphitrite. The character of King Triton was Ariel’s father in the Disney classic animated movie The Little Mermaid. Symbols on the Triton’s Treasure video slot are King Triton, Mermaid, Palace, Sunken Ship, Octopus, Treasure Chest, Fish, Crab, Jellyfish, Statue, Urn and Seashells. The symbols are more realistic looking than most Real-Series Video Slots, which tend to have more of a cartoon-style. The video slot is set underwater with animated bubbles seen in the background. For a look at the Triton’s Treasure slot game from RTG, a screenshot is below: 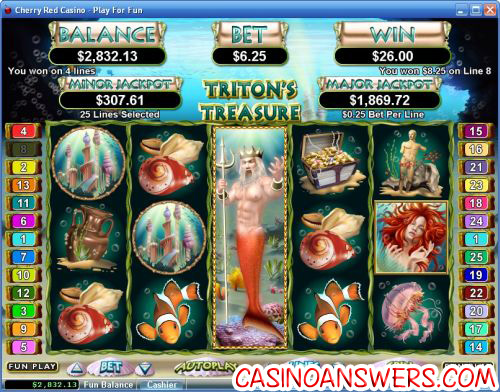 The Mermaid is the scatter symbol on Triton’s Treasure. 2, 3, 4 or 5 Scattered Mermaid symbols will pay out 1X, 2X, 10X or 100X your total bet. When 3 or more Scattered Mermaids appear anywhere on the reels, you will win 5 free spins with a 1X initial multiplier. You will receive 1 bonus pick for each Mermaid symbol that lands on the reels. With each pick you receive, you can win 5 additional free spins or to increase the multiplier by 2. If 3 or more scatter symbols occur during the free spins feature, you will receive 5 additional free spins. Free spins are played at the lines and bet of the triggering game.

All symbols pay left to right except for scatter symbols (which pay any). Wins on different paylines are added. Scatter wins are added to payline wins. Scatter wins are multiplied by the total bet. Payline wins are multiplied by the bet per line. Highest win only on each payline. The maximum win per paid spin is 50,000X bet per line. For a look at the complete payout schedule, a screenshot of the Triton’s Treasure paytable is below: 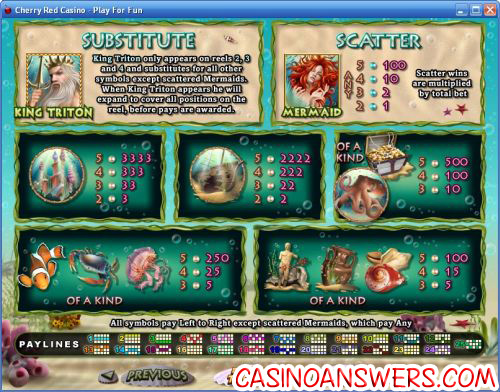 Triton’s Treasure has two progressive jackpots called the Minor Jackpot and Major Jackpot. At the time of this writing, the Minor Jackpot is at $309 and the Major Jackpot is currently set at $1,871. The progressive jackpots are randomly triggered and can be won at the conclusion of any spin you make on Triton’s Treasure. Progressive Jackpot wins are added to other wins. Random Jackpot contribution is no more than 1.5% of total Return to Player.

Hit the “Autoplay” button to open the autoplay settings. You will be able to set the number of spins, set it to stop when the jackpot is won, stop if a win exceeds or equals (any amount you input), stop on any win, stop if your balance increases/decreases by any amount you input and stop once the feature is triggered. You can stop the Triton’s Treasure autoplay mode using the “Stop Auto” button to deactivate it. Turbo Play can be found in the autoplay settings if you’d like to speed up the gameplay.

Triton’s Treasure offers some good top payouts in addition to the expanding wild symbol that is sure to win you some cash when you play Triton’s Treasure. If you’re looking for a good merman or mermaid slot, you can play the Triton’s Treasure video slot when you sign up and make a first deposit today at Cherry Red Casino!

Can I play a free Flash game of the Triton’s Treasure slot?

Unfortunately, Triton’s Treasure is not offered at Cherry Red Flash Casino and Club USA Flash Casino. However, you can play a Flash game of the more non-fantasy underwater video slot called Crystal Waters.

How do I trigger the Triton’s Treasure progressive jackpots?

Where can I play the flash version of Tritons Treasure?