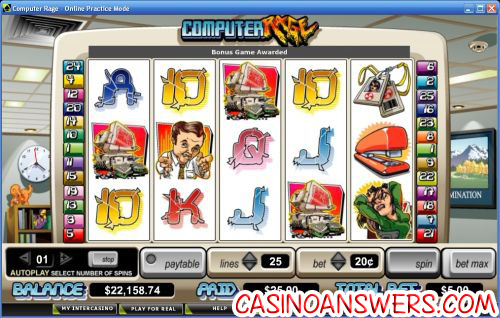 When three or more Scattered Computers appear on the reels, you will trigger the Smashed Computer bonus game. You must smash three of the five computers with a sledgehammer. Each computer you smash will award you with a prize. We were able to trigger this feature three times and each time we won over $100 in the bonus game off a $5 total bet. Smashed Computer feature wins are added to payline and scatter wins. Below is a screenshot of the Computer Rage video slot: 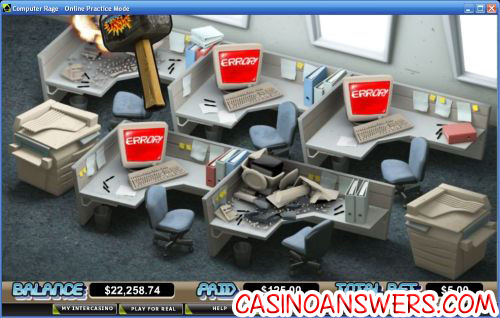 When the Boss symbol lands on the first reel at the same time as the Frustrated Girl symbol appears on reels 4 and 5, you will trigger the Computer Rage bonus game. In the bonus game, you will get to choose 5 of 10 windows. When a computer if pushed out of a window you choose, you will win a prize. This feature is not triggered as often as the Smashed Computer bonus game, but when we were able to get it, we were able to win $105. Wins from the Computer Rage feature are added to payline and scatter wins.

Computer Rage offers a theme that many slots players can relate to. In addition to that, there are two bonus games that can both lead to some large wins. If you’re looking for the right online casino to play the Computer Rage video slot at, we recommend you sign up and make a first deposit at InterCasino!

Unfortunately, players from the United States of America are unable to play the Computer Rage video slot at Cryptologic online casinos. For a great selection of USA-friendly video slots, Americans can play at or read our Millionaire Casino Review

Where can I find a Flash game of the Computer Rage slot game?

Are there any flash games where you smash up an office? Are there any Office online slot games? Video slots with fun bonus games that are also satisfying,