Penalty Shootout is a football (or soccer) game. In the game, you play as the shooter and you must choose in which direction to shoot. Your goal (no pun intended) is to fool the goalkeeper. The game consists of a player with his back to the camera, facing the goal. The goalkeeper is standing in the center of the net. Here is what the Penalty Shootout arcade game looks like: 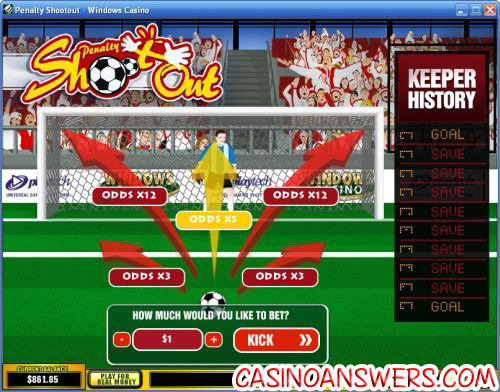 Once you have kicked the ball, the keeper will usually dive for the ball and either save it or miss it. Sometimes you will catch him off-guard, he will miss the ball completely and the ball will go in. If he makes the save, a banner will come up with a message that says “Keeper saved the shot” and you will lose. If you score, the banner will read “GOAL!” and you will win.

At the right side of the screen, Penalty Shootout will list the game’s history. Under “Keeper History,” it will list the previous 10 shots. The shots will show the place you kicked the ball and whether the outcome was a “Goal” or a “Save.”

The graphics on the Penalty Shootout arcade game are what you would expect. You are playing on a field. There is a barrier with the logo of casino you are playing at along with the Playtech logo. Behind the barrier you will see the crowd of rowdy fans. They are static, rather than animated. 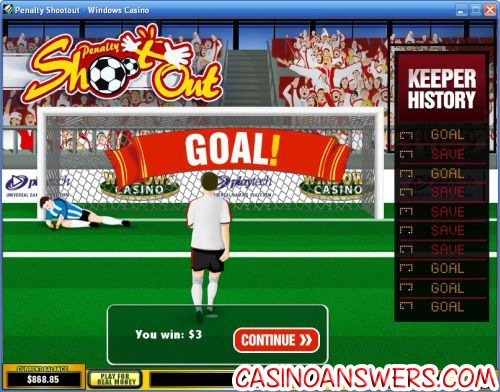 Penalty Shootout is a great chance of pace compared to the majority of casino games such as Blackjack, Roulette, Video Poker and Slots. It’s nice to see that Playtech has gone above and beyond what is expected from an online casino and included games that you may not see at a land-based casino, but there is no reason you can’t find a game like Penalty Shootout at an online casino. To try Penalty Shootout out and get a $4000 signup bonus while you’re at it, please visit Titan Casino.

Are players from the US able to play Penalty Shootout?

Unfortunately, Playtech casinos are not accepting players from the United States at this time. There isn’t really any games like Penalty Shootout available on the other online casino platforms right now, but US players can play some very innovative video slots called iSlots at Slots Jackpot Casino.

What kind of game is Penalty Shootout?

Penalty Shootout is not a traditional casino game. Penalty Shootout is an “arcade” or “specialty” game. Playtech is the place to go if you’re looking to bet on games that you won’t find at any brick-and-mortar casino. To try out some of these arcade games, visit Titan Casino.

What are my odds of winning on Penalty Shootout?

Depending on where you decide to kick the ball, you have a 1-in-3 chance, a 1-in-5 chance or a 1-in-12 chance of winning on Penalty Shootout. This also means that you can win 3X, 5X or 12X your bet in the game.

Do I need to download any software to play the Penalty Shootout video game?

Penalty Shootout is an online casino game that uses software made by Playtech Plc, a software giant that is located in Douglas upon Isle of Man. Penalty Shootout, which is soccer-styled, is described as an arcade game. Incidentally, the term “penalty shootout” is synonymous with sporting activities such as football and hockey; this is a penalty kick-like shot, which is used to decide the winner, wherein two equally powerful teams have ended up in a draw even after using the allocated extra time.

So, what if you are the preferred penalty kicker of your team which is angling for a win in penalty shootouts against a rival soccer team? How many of your shots would translate into goals, or would the goalkeeper of the rival team save all of them? That is the objective of Penalty Shootout. Penalty Shootout was inspired by the exciting yet suspenseful last-minute playing moment, particularly concerning a knockout stage.

Penalty Shootout lets the players stake any preferred amount, which must be between $0.10 minimum and $100 maximum. Players adjust their stake using the red “+” and “—“ icons, located at the center of the interface. Thereafter, they choose the ball’s possible path then they press the “Kick” button. Scoring goals implies winning while the pop-up “Keeper saved the shot” implies losing.

Penalty Shootout: Game Review
The ball’s paths, which are marked with arrows that have varying lengths, show the trajectories that the kicked ball might follow. There are three types of arrows. The first group consists of two red-colored short arrows, which pinpoint the lower left and lower right positions of the goalpost. Ordinarily, real-life penalty kickers prefer these trajectories over the others due to the high probability of scoring. Unfortunately, they have the lowest payouts because their odds are X3.

The second category has a lone relatively longer red arrow, which pinpoints top centre. In real –life, penalty kickers see the risk of a ball hitting the woodwork then bouncing. This arrow has the second highest payout because its odds are X5. The third group consists of the longest red-colored arrows, which pinpoint upper left and upper right positions of the goalpost; these arrows have the highest payouts, which is X12. The trajectory that the Penalty Shootout player has chosen is highlighted in yellow. The graphics is realistic, ranging from the moody spectators in the background to the diving goalkeeper to the determined kicker. Moreover, the player can easily access the “Keeper History” so as to track the goals scored and the goals that the goalkeeper has saved.

One problem of Penalty Shootout is that the player has to keep on pressing “Continue” so as to prompt the virtual penalty kicker to kick the next shot. There is nothing like automated multiple rounds. Secondly, the Penalty Shootout player has limited control; the player controls the ball’s trajectory and when the kick is made, but has no control over the ball. The player is seemingly relegated to the role of a referee or spectator instead of being proactive. Third, the virtual goalkeeper is exceptionally skilled, which makes scoring goals an uphill task; worse still, non-existent bonuses augur bad.

What world cup arcade games are there?