Hole In Won: The Back Nine Interactive Slot Machine

Hole In Won: The Back Nine Game Description 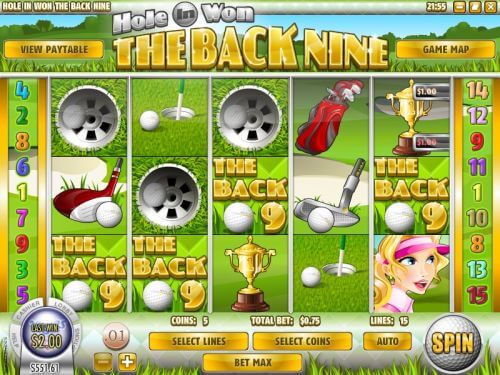 Hole In Won: The Back Nine Betting Options

The Back Nine casino game is a penny slot. Coin values on the Hole in Won: The Back Nine slot machine are $0.01, $0.05, $0.10, $0.25 and $0.50. You can select from 1-15 paylines at 1-5 coins per payline on The Back 9 iSlot. You can bet anywhere from a penny per spin on the Back Nine online slot up to the maximum total bet of $37.50 per spin. The Back Nine has a low betting range that is best suited towards casual slots players rather than high rollers. To play The Back Nine interactive slot machine, select your bet and press the “Spin” button. If you want to play all 15 lines at 5 coins per line, use the “Bet Max” button to spin the reels.

Hole In Won: The Back Nine Top Payouts

Hole In Won: The Back Nine Special Features

The Flag symbol is wild on the Back Nine slot game. The Flag wild symbol will only appear on reels 2, 3 and 4. When it lands on one of these reels, it will become an expanding wild and it will fill the entire reel. The wild symbol will substitute for all symbols except for scatter symbols, thus creating new winning combinations. This is a valuable symbol to get when you’re playing the Back Nine iSlot game at Bovada!

The scatter symbol on The Back Nine iSlot is the Male Golfer symbol. When three (or more) of these scatter symbols appear anywhere on the reels, you will launch The Back Nine’s skill-based bonus game. You will get to compete at the National Mini Golf Championships. Each time you trigger the bonus game, you will get to play the next hole until all nine holes have been played. To play the game, aim your shot with your mouse. The further away your cursor is from the ball, the more power your shot will have. To shoot, click the mouse. The better your shot is, the larger prize you will win! Practice all nine holes to become a pro-golfer! You can always check your progress by clicking the “Game Map” button at the top-right corner of the slot game. For a look at the Hole In Won: The Back Nine bonus game, a screenshot has been provided below: 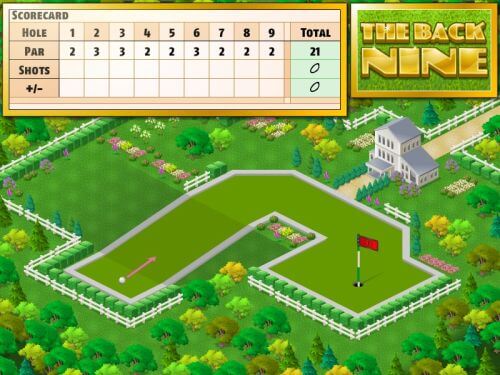 Hole In Won: The Back Nine Game Rules

Hole In Won: The Back Nine Autoplay Mode

The Back 9 video slot has an autoplay mode available for real money players only. To access it, press the “Auto” button. You can play from 1-500 autoplay spins, stop when your balance increases/decreases by $1-1000, stop on any win and set a delay between spins of 0-10. You can stop the autoplay mode on the Back Nine online slot machine at any time by pressing the “Stop” button.

Hole In Won: The Back Nine Summary

Hole In Won: The Back Nine is an excellent iSlot for those who enjoy a nice day out playing some mini-golf. It’s especially great for those who prefer skill-based bonus games to pick ’em or random bonus games. There is also an expanding wild feature, which can be very lucrative. You can start putting now by signing up today at Bovada!

Can players from the United States play The Back Nine slot game for real money?

Unfortunately, American players are unable to play Hole in Won: The Back Nine iSlot for real money at this time. For a great selection of sports-themed slots you can play within the USA, please visit Bovada.

Where can I play other golf-themed slot machines?

For more golf-themed slot games (including the original Hole In Won iSlot), please read our list of sports-themed slots.

Where can I read more interactive slot reviews?

If you crave more iSlot information, you can read more iSlot reviews by checking out our Rival iSlot List.

Alternative Ways To Ask/Incoming Search Traffic:
The answer to the question Hole In Won: Back Line Interactive Slot Machine is also applicable for the following questions: