Slot Century’s scatter symbol is the Classic Slot Machine symbol. At least 2 scatter symbols anywhere on the reels will multiply your total bet amount from anywhere from 1X all the way up to 300X.

3 Wheel bonus symbols anywhere on the second, third and fourth reels on an active payline will trigger Slot Century’s Fortune Fairground bonus game. At first, you will spin a small wheel to determine whether you will get 1-3 spins on the bonus game. Then, you will get to spin the big wheel up to 3 times to win bonus points. After you make a spin, you can collect bonus winnings and end the game or spin again to try and win a higher bonus prize. The Fortune Fairground bonus game is a great way to win big on the Slot Century casino game at Lucky Ace Casino. 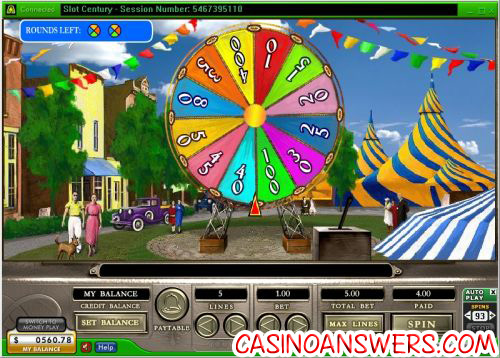 Slot Century has an autoplay feature. There are no advanced settings. Open up the autoplay mode and either type in up to 99 spins or use the “+” and “-” buttons to select the number of spins you wish to play. To start autoplay, hit the “Max Lines” or “Spin” buttons. You can cancel autoplay at any time by hitting the “Stop” button below the number of autoplay spins.

Slot Century takes the slot player back to a time when slot machines were in their infancy, but in doing so still allows for video slot special features such as wild symbols, scatter symbols and even a Wheel bonus game. To play the Slot Century video slot, sign up and make your first deposit today at Lucky Ace Casino!

Are players from the United States able to play the Slot Century video slot?

Unfortunately, US players are not welcome to play at Random Logic online casinos such as Lucky Ace Casino and 888 Casino. If you are looking for a 5-reel, 5-line video slot to play, there are some available at the US-friendly Slotland Casino.