Why do the Miami Heat Fans Wear White During the NBA Playoffs?

Don’t worry – it’s not some secret Ku Klux Klan meeting that just happened coincide with the Heat playoff games at the American Airlines Arena. Here’s a picture from the Heat 76ers Game 1 on April 16, 2011: 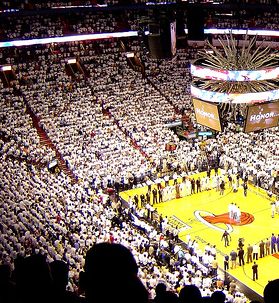 All the seats were draped in white and all fans were encouraged to wear a white t-shirt. Those who didn’t were given a white t-shirt as they entered.

At it’s core, this is basically a promotion by the Miami Heat to encourage team spirit and unity. If you’ve ever attended a college basketball game then you know how amazing that sort of atmosphere is – this is a promotional tactic to hopefully get that same crowd chemistry, because with the fans wearing the same colour and outfit it helps unify them.

Where can I purchase White Hot Merchandise?

Alternative Ways to Ask/Incoming Search Traffic:
The answer to the question Who do the Miami Heat Fans Wear White During the NBA Playoffs? is also applicable for the following questions: