Golden Games is a 5-reel, 25-line video slot developed by Playtech, featuring a wild symbol, scatter wins, multipliers, a free spins feature and a gamble feature. You can play the Golden Games video slot at Bovada.

Golden Games is an Olympic games-themed video slot. Symbols include Golden Games Medal (wild symbol), Discus Thrower (scatter symbol), Flame (bonus symbol), Stopwatch, Tennis Racket, Basketball, Weights, Cyclist, Boxer, Fencer, Runner and Swimmer. Many of the symbols are animated on Golden Games and have sound effects. For a look at the Golden Games video slot from Playtech, a screenshot has been provided below: 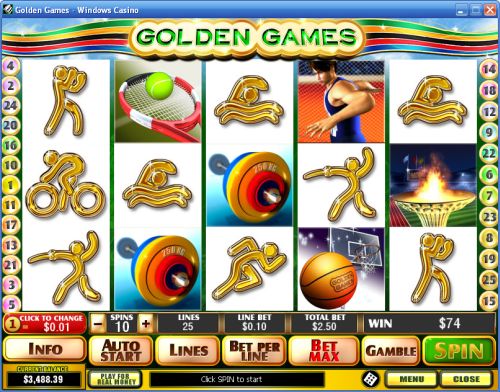 Coin values on the Golden Games slot machine are $0.01, $0.05, $0.10, $0.25, $0.50, $1, $2 and $5. You can select from 1-25 paylines and 1-10 coins per line. The lowest total bet you can make on the Golden Games video slot is a penny per spin up to the highest total bet of $1250 per spin. As you can tell, Golden Games has an amazingly large betting range that will suit any slots player – from the most casual player to the highest of high rollers. There is an autoplay mode where you can play up to 99 autoplay spins at a time. To play the Golden Games video slot, select your bet and hit the “Spin” button or to play with all 25 lines active and 10 coins per line, you can press the “Bet Max” button.

The scatter symbol on Golden Games is the Discus Thrower. 2, 3, 4 or 5 Scattered Discus Thrower symbols anywhere on the reels will pay out 1X, 5X, 25X or 250X your total bet.

After any win on Golden Games, you choose to risk your winnings by hitting the “Gamble” button and activating the gamble feature. All you will have to do is predict whether the facedown card will be Red or Black and you will double your winnings if successful. You can play up to the double up limit (varies depending on the casino) or until you hit the “Collect” button. For a look at the Golden Games gamble feature, a screenshot has been provided below: 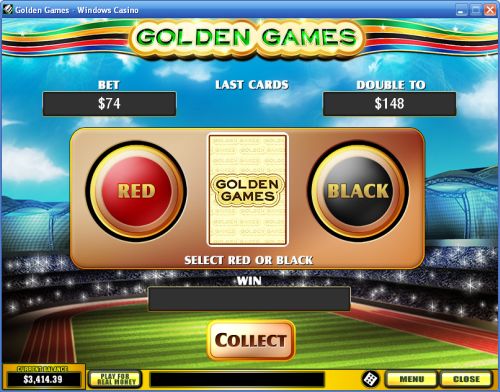 Golden Games is a good video slot put out by Playtech. It has nothing that makes it stand out, but is solid all around. The one thing we are disappointed about with Golden Games is its lack of bonus game. One would think it would be an obvious inclusion for an Olympic-themed slot machine, but apparently it wasn’t in the cards for Golden Games. You can play Golden Games for real money when you sign up and make a deposit at Bovada.

American players can unfortunately not play the Golden Games video slot for real money. You can, however, play the Olympic Slots game at Bovada.

Can I play a free Flash game of the Golden Games video slot?

Yes, you can find an Instant Play version of Golden Games available at Bovada. You can play for free or you can play for real money. If you experience any difficulties with the Flash software, make sure you are using the newest version of Adobe Flash Player.

Where can I read more sports-themed slot reviews?

If you want more to read about other sports slots, you can read our list of sports themed online slots.