Playtech’s Fantastic Four video slot certainly looks fantastic. The video slot looks great, has great animations for each of the characters, and the music is very well done. One of the best parts to the slot machine is when you get one scatter symbol, the music begins to build… and then you hit a second scatter symbol and the music builds even more. This adds an infinite amount of excitement to the game, and hence increases the gaming experience. 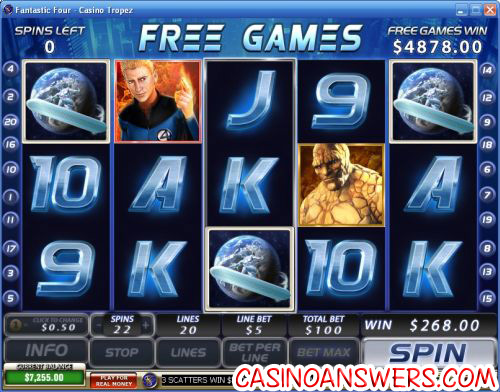 Coin values on the Fantastic Four slot machine are $0.01, $0.05, $0.10, $0.25, $0.50, $1 and $2. You then must choose a line bet in denominations of up to 10X your coin value. Your line bet will then be multiplied by the amount of lines you play (up to 20). Due to the sheer amount of different options available to players, Fantastic Four is suitable for high rollers and casual players. We recommend you play with all of the lines active, so adjust your coin value and line bet according to that.

Hit 3 Earth scatter symbols and you will be trigger free games with 4 fantastic features. You will win 12 free spins with reel 3 stacked with the Fantastic Four characters. The Mr. Fantastic, Invisible Woman, Human Torch and The Thing features are triggered when the corresponding Fantastic Four character covers the entire third reel. You cannot retrigger free spins when three more scatter symbols appear, but you can win and likely will win more free spins during the free spins feature.

The Thing is the freezing wild. When The Thing covers the third reel during the free spins feature, three more extra spins will be awarded. If The Thing appears during these free spins, he will become a wild symbol and will freeze in place for the remaining extra spins. He will substitute for all symbols except the wild and scatter symbols.

Here’s a screenshot of the Fantastic Four video slot’s paytable: 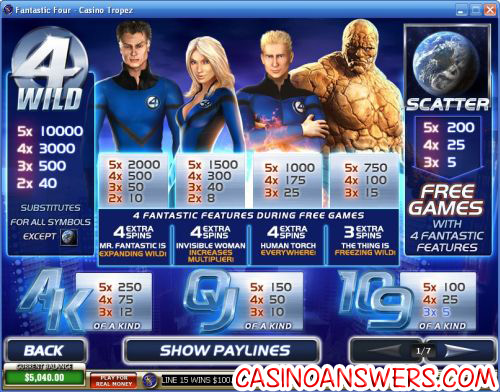 The Jackpot Game is a 4X5 grid of 20 squares hiding different jackpot symbols. You must click on these squares to reveal the symbols. Once you have matched three of the same symbol, you will win the corresponding progressive jackpot. The game will be timed, so if you’re too slow, they’ll pick a winner for you!

Fantastic Four is an excellent offering from Playtech. There is a large range of wagers available, the game looks and sounds tremendous and the free games feature will very likely earn you a big win. To play the Fantastic Four video slot and get a generous casino signup bonus of $4000 over your first six months at the casino, sign up at Titan Casino!

Are US players allowed to play the Playtech Fantastic Four video slot for real money?

While US players can download the Titan Casino software and play for play money, they are unable to play for real money at this time. For some other great progressive jackpot slots that are US-friendly, head over to Slots Jackpot Casino.

Is there a slot machine based on the Fantastic Four movie?