Video Poker: What Makes It Different From The Conventional Game?

For those of you who have played poker in a casino or with friends, you may wonder if your expertise would go to good use with video poker.

You may be wondering if being a good poker player can increase your chances of winning with video poker.

In both games, those who have studied the art of poker and practiced it will gain a house edge. Both of the games will have variations online, but there are definitely some notable differences.

When playing video poker, the hand rankings are quite similar. Video poker games pay more for a full house than three of a kind, but some versions will pay the same for straights and flushes. Also, straight flushes aren’t always worth more than four of a kind.

With video poker, the size of any hand isn’t so important. Say you have an ace-high flush, it’s not worth more than a 7-high flush. Some of the video poker variants will have a pair of jacks holding more worth than a pair of tens. However, in the same game, two kings won’t be more valuable than two jacks. With poker, a low two pair could lose out to a high two pair.

In regular poker, there are often many betting rounds with several decisions made in a round. In video poker, there is but one decision.

The player makes their choice before the draw. The draw happens and the game is over. Every player will get to play to the end with every game they bet on. 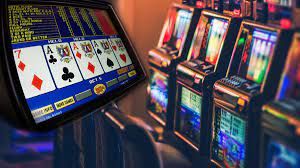 There is no possibility of bluffing or using the other strategies you’d normally use in a video poker game. Conventional poker of course thrives on this as part of the game.

When playing poker, a good player is likely to win most of the time but this isn’t the case in video poker. Even when you have the advantage, you can lose out on sessions you would have won when playing conventional poker. However, when playing multiple rounds, you are still likely to be a significant winner.

With video poker, you can analyze the “house,” your opponent accurately. If you play perfectly, you can expect the win or loss to be close to your mathematical expectations. With poker, your opponents are going to have different strengths and weaknesses so it’s impossible to analyze in the same way. With live poker, you’ll see opponents adjusting their game play and strategies.

The nice thing about video poker is that you can play them anytime on your laptop or mobile device. They are always available, and you don’t even have to leave home. You might not have enough live players to make up a poker game at a casino. With video poker, there are thousands of these games being played globally at any given time.

You have plenty of variety and can change what game you want to play. Conventional poker requires you to go to a casino or organize a night of poker. It’s a lot less available and convenient compared to video poker online.

While you’re in the comfort of your own home, you can get help from your neighbor in the game. This is not the case when playing a poker game. It’s strictly forbidden to talk about the game or look to someone else’s cards.

The House and the Stake

When you’re playing a conventional poker game, the “house” doesn’t have a stake. They will collect a fee for the services they provide while players play against one another. In video poker, you’re playing against the house and so are all of the other players. Players aren’t against each other unless you’ve entered into a tournament or are playing a progressive jackpot.

With live poker, the more competition there is, the higher the stakes go. Players at a table playing $2 to $4 per game aren’t as competent as those sitting at a $100 table. Your strategy will need to differ between the low roller and high roller tables.

This isn’t the case with video poker. You can find games that range from .10 cents to $100 per coin. Whatever you decide to bet, the strategy can remain the same.

The video poker games are heavily regulated and audited to ensure they’re fair. If you play video poker on a legit site, you can trust the game you’re on. Click here to find out more: https://www.bovada.lv/casino/blackjack-games

There are gaming commissions out there that are constantly monitoring legitimacy and randomness.

With live poker, there are of course plenty of honest players but there are also players that bend the rules to win.

Video Poker is more a game of chance than conventional poker. While the standard poker game often attributes more emphasis to skill and reading your opponent’s moves, video poker is similar to slots.

Still, both games are very fun to play and definitely worth trying if you are into casino games.