Casino Answers » Casino Trivia » What Is The Biggest Casino In Adelaide, Australia?


What Is The Biggest Casino In Adelaide, Australia?

When you mention the city of Adelaide, the capital of South Australia evokes images of cathedrals and wineries, because that is what the city is essentially famous for. Tourists go there to sample the great wines and takes in a bit of history. What they may not know is that there is a rather large casino in the north of the city that has been there for 30 years. 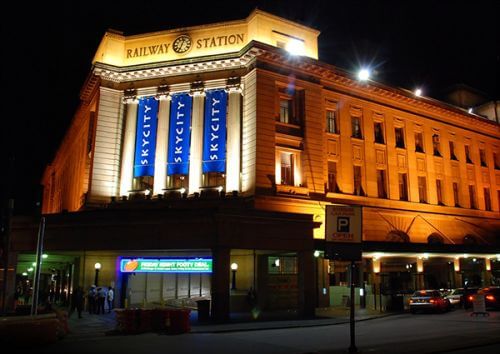 The Adelaide Casino opened its doors to the public at the end of 1985, with nearly 90 table games and no slot machines on the floor. This was the status quo until 1991 when the Adelaide Casino was granted a license to operate slot machines on its floor, and video poker machine licenses were granted in 1993. After that, the number of electronic games grew to over 650 by 1997. That number now stands at 950, while the number of table games has stayed more or less the same due to current legislation in South Australia.

The Adelaide Casino has been owned by casino operator SKYCITY Entertainment since 2000, with the casino taking on the SKYCITY branding until 2009, when the name again became Adelaide Casino, in an effort to preserve some of the history behind the iconic casino. The SKYCITY Entertainment group also operate in Darwin and New Zealand, making it one of the biggest gaming brands in the Southern Hemisphere.

You can play the traditional casino table games at Adelaide Casino, with blackjack and roulette being the most common, although there are baccarat tables (and actually a baccarat pavilion), a big wheel, Caribbean Stud Poker, Casino War and a relatively unique game called In Between, which involves players wagering on whether the third card drawn will land in the range between the first two cards drawn. If you are looking to play poker without the house edge, there is also a poker room in the Adelaide Casino. Although it is not the busiest poker room in the country, there is enough traffic to make it a worthwhile stop should you find yourself looking for a game of cards while in the city.

One of the main features of the casino is not on the floor, but something that is hanging from the ceiling. The chandelier hanging overhead is made with thousands of crystals and is a sight to behold, and it adds to the elegance of the Marble Hall. With this in addition to the grand exterior of the Railway Building, it adds a sense of class to the Adelaide Casino, which is a nice touch for the seasoned casino customer.

There are currently three restaurants on-side at Adelaide Casino, with the highlight being North, while there is also a buffet and a more casual cafe to get fed at. Five unique bars are also dotted around Adelaide Casino, so if you want to sample the region’s great wines, you can head to the Chandelier Bar, although the four others also offer a great selection of wines from South Australia and beyond.

So while you might not head to Adelaide to see anything other than cathedrals steeped in history, Adelaide Casino is definitely worth paying a visit, even if it is just to take in what is certainly a grand and classy casino, unlike any other on the continent. It might not be the biggest, but it has a charm that cannot be found in some of the more generic casinos that can be found around the world. Plus, the fact that you can still sample the great South Australia wine while playing the great variety of casino games means that the Adelaide Casino ticks a lot of boxes.

Alternative Ways to Ask/Incoming Search Traffic:
The answer to the question What is the biggest casino in adelaide? is also applicable for the following questions: