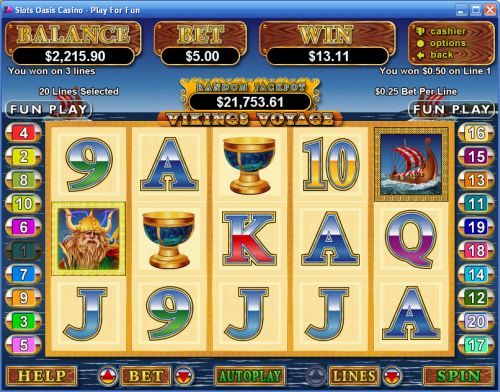 The Viking Lady is the highest paying symbol on the Vikings Voyage online slot game. If you land 5 Viking Lady symbols on an active payline, you will win the 5000 coin top jackpot on Vikings Voyage. The second best symbol is the Axe, which will pay up to 2000 coins. Next is the Coin symbol at 1000 coins.

The Viking is the wild symbol on Vikings Voyage. It only appears on reels 1 and 5 and substitutes for all other symbols except for the Scattered Longboat symbol. It does not payout by itself.

Vikings Voyage features a progressive jackpot, which at the time of this writing is at $21,011.56 and rising fast. Progressive Jackpot wins are added to other wins. Random Jackpot contribution is no more than 1.5% of total Return to Player.

Wins on different paylines are added. Scatter wins are added to payline wins. Scatter wins are multiplied by the total bet. Payline wins are multiplied by the bet per line. Highest win only one each selected payline. Maximum win per paid spin is $50,000X bet per line. All symbols pay left to right and/or right to left, including the Scattered Longboat symbol. For a look at the Vikings Voyage paytable, a screenshot has been provided below: 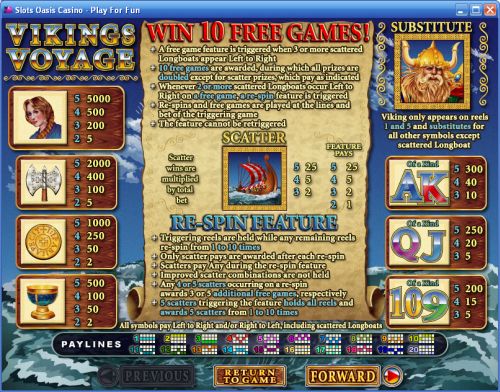 Hit the “Autoplay” button to open the autoplay settings. You will be able to set the number of spins, set it to stop when the jackpot is won, stop if a win exceeds or equals (any amount you input), stop on any win, stop if your balance increases/decreases by any amount you input and stop once the feature is triggered. You can stop Vikings Voyage’s autoplay mode using the “Stop Auto” button to deactivate it.

Vikings Voyage is a very solid RTG Real-Series Video Slot. It may not be one of the best, but it’s still very much worth playing. It has a progressive jackpot, some good payouts, free spins and re-spins. You can play it when you sign up and make a deposit today at Bovada!

Can players from the United States of America play the Vikings Voyage online slot for real money?

Yes, players from the USA are welcome to play the Vikings Voyage video slot at Bovada.

Alternative Ways To Ask/Incoming Search Traffic:
The answer to the question Vikings Voyage Video Slot Review is also applicable for the following questions: