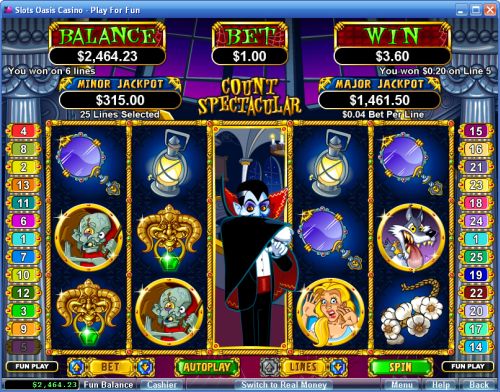 Count Spectacular’s scatter symbol is the Castle symbol. 3, 4 or 5 Scattered Castle symbols will pay out 2X, 20X or 200X your total bet.

The Count Spectacular video slot features two progressive jackpots – the Minor Jackpot and Major Jackpot. The jackpots are currently at $315 and $1,461 respectively. Both of these jackpots are triggered at random and can be won on any spin you make on the Count Spectacular slot game. Progressive Jackpot wins are added to other wins. Random Jackpot contribution is no more than 1.5% of the total Return to Player. 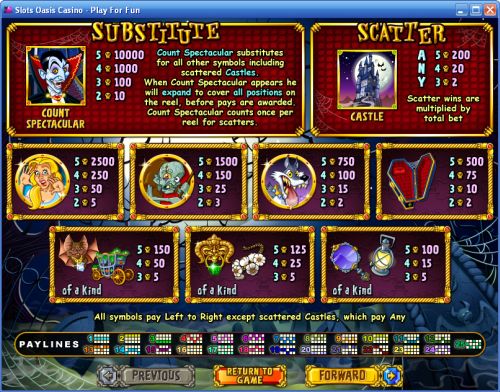 Hit the “Autoplay” button to open the autoplay settings. You will be able to set the number of spins, set it to stop when the jackpot is won, stop if a win exceeds or equals (any amount you input), stop on any win, stop if your balance increases/decreases by any amount you input and stop once the feature is triggered. You can stop Count Spectacular’s autoplay mode using the “Stop Auto” button to deactivate it.

If I’m based in the USA, can I play Count Spectacular slot game for real money?

Yes, you can play the Count Spectacular video slot at many RTG online casinos, including two of the best, Bovada.

How do I win the progressive jackpots on the Count Spectacular online slot?

Where can I play more Halloween-themed video slots?

To play more Halloween video slots, you can read our list of Halloween slots.