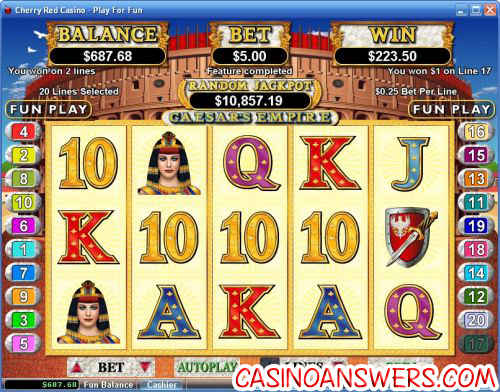 The Caesar symbol is the wild symbol on the Caesr’s Empire slot game. It appears on reels 1, 2, 3 and 4 during the regular slot spins and substitutes for all symbols except for the Scattered Coliseum symbol. When the Caesar symbol completes a winning combination, it will triple your prize. The Caesar symbol will pay up to 2500 coins for four symbols.

The highest paying symbol on the Caesar’s Empire video slot is the Cleopatra symbol. On its own, the symbol will pay up to 2500 coins. However, when four Cleopatra symbols combine with a Caesar symbol, you can win the top jackpot of 7500 coins.

All symbols pay left to right, except for Scattered Coliseums (which pay any). Wins on different paylines are added. Scatter wins will be multiplied by the total bet and added to payline wins. Payline wins are multiplied by the bet per line. Free spins are played at the paylines and bet of the triggering spin. The highest win only on each line is paid out. Maximum win per paid spin is 50,000X bet per line. For the full payout schedule, here is a screenshot of the Caesar’s Empire paytable: 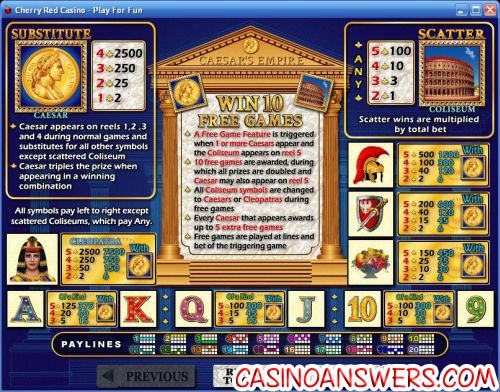 Hit the “Autoplay” button to open the autoplay settings on the Caesar’s Empire slot game. You will be able to set the number of spins, set it to stop when the jackpot is won, stop if a win exceeds or equals (any amount you input), stop on any win, stop if your balance increases/decreases by any amount you input and stop once the feature is triggered. You can stop Caesar’s Empire’s autoplay mode using the “Stop Auto” button. You can also find Turbo Play in the autoplay settings to speed things up.

Caesar’s Empire offers an excellent free spins feature that only requires two symbols to hit, a progressive jackpot and lots of high payouts. It fits in with the rest of the Real-Series Video Slots, which all have similar features and high-end presentation. To play the Caesar’s Empire video slot game, please visit Aladdin’s Gold Casino!

Are players from the United States able to play the Caesar’s Empire video slot?

American players can take advantage of the 200% unlimited signup bonus at Aladdin’s Gold Casino or play Caesar’s Gold at Bovada.

Where can I play a free Flash game of the Caesar’s Empire slot machine?

For a free Flash game of the Caesar’s Empire video slot, you can visit either Aladdin’s Gold Casino and Bovada. You can play for free or play for real money. If you experience problems with the Instant Play Flash casino software, make sure you have the newest version of Adobe Flash Player installed.