Fixer-Upper is a 5-reel, 20-line iSlot-branded video slot from Rival Gaming. The Fixer-Upper iSlot has a 3-level bonus game, free spins with multipliers, expanding wilds and an astounding 8,888 coin top jackpot. You can play Fixer-Upper at any Rival-powered online casino, including Bovada.

As with all iSlots, Fixer-Upper has a storyline. When you first start the video slot, you will be taken to an intro video that tells you the story. Fixer- Upper is about a couple who are buying their first house. It doesn’t look like much, but they plan to fix it up themselves into their ideal home.

As all iSlots are, Fixer-Upper brings a few interesting twists to the realm of video slots. You start off on one level, and after you complete each level of the bonus game, you will move up in levels. At first, you start off in a pipe level, then you move to a painting level and finally the last level is a window, looking outside. Each of these will be reflected in the bonus rounds. Here’s what the Fixer-Upper slot machine looks like at the first level: 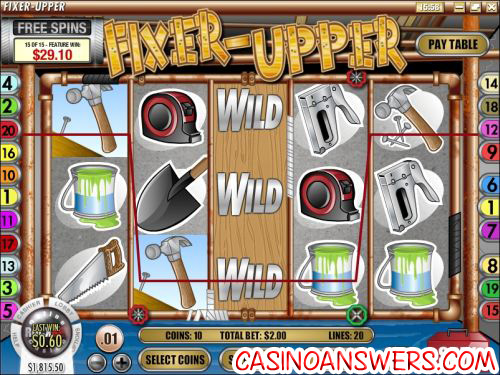 Symbols in the Fixer-Upper iSlot are: ladder (wild symbol), wrench (bonus symbol), Handywoman (scatter symbol), Handyman, staple gun, paintbrush, paint can, shovel, hammer, saw, drill and tape measure. The bonus symbol will change to the paint can and the shovel as the game’s story mode progresses.

To get started on Fixer-Upper, choose your coin value. Coin values available are $0.01, $0.05, $0.10 and $0.25. Once you have chosen your value, you must select how many coins you wish to play (up to 10). Wins are multiplied by the number of coins staked (except scatter wins). Finally, choose the number of lines you wish to play (up to 20). Only the highest win on a payline will be paid out.

The wild symbol in the Fixer-Upper video slot is the ladder. During normal play, winning combinations using wild symbols are multiplied by the number of wilds in the combination. The ladder wild symbol also is the top jackpot in Fixer-Upper. If you hit five ladders, you can win 8,888 coins! It is by far the biggest win in Fixer-Upper. Even four ladders will win you 888 coins. The next biggest is the Handyman symbol, worth 500 coins for five. You can win these great payouts by playing the Fixer Upper interactive slot game at Bovada.

Fixer-Upper has a three-level bonus game. If three or more wrenches appear on the reels during the opening stage, you will trigger the first bonus game. The first bonus game is a game similar to Pipe Dream, without the time limit. Your basement has flooded and you find that there are several rusty pipes. You must click on these rusty pipes and replace them with a fresh pipe. Each pipe you replace will award you with a prize. Once you have completed the first level of the Fixer-Upper bonus game, the bonus symbol will become the can of paint and the game’s background will change from a pipe theme to a painting theme. The second stage is a painting stage. You must choose a colour and paint a wall. Make sure not to miss any spots. After this stage is complete, your bonus symbol will now be the shovel. Get three shovels on Fixer-Upper’s reels and you will trigger the final (and most fun) stage, which is a game of Whack-A-Mole, but with groundhogs instead of moles. All three stages are very easy to complete. Here’s a screenshot from the third level of the bonus game: 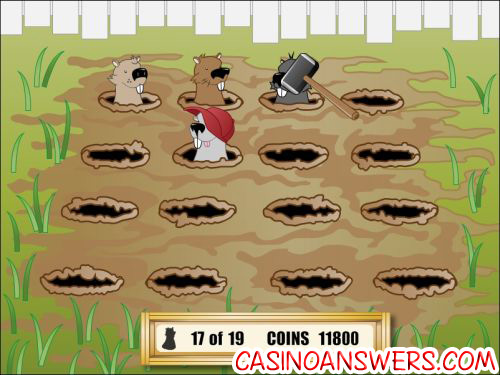 Overall, we were a little underwhelmed by Fixer-Upper at first, partially because the first bonus game took us a while to get, but we turned the corner on this iSlot once we started triggering the bonus games. There aren’t too many video slots that have not one, not two, but three bonus game levels (except for other iSlots). To try out Fixer-Upper and the rest of the excellent iSlots Rival has put out with a 100% signup bonus up to $500 and a $100 free cash no deposit bonus, visit Slots Jackpot Casino.

Unfortunately, American players are no longer permitted to play at Rival online casinos for real money. Instead, we invite you to play at Slotland Casino.

Does the Fixer-Upper iSlot have a progressive jackpot?

What other Interactive Slots can I play at Rival Gaming casinos?

﻿In 2004, the first episode of Poker Superstars was broadcast.