Slota Bonita is a football (or soccer) themed slot machine. On the slot machine itself, you can see silhouettes of fans going crazy. The lever has a soccer ball on the end of it. You can press the “Casino” button to show a casino in the background or press the “Field” button to show the slot machine in the middle of a football field. Symbols on the Slota Bonita classic slot game include the Gold Cup (wild multiplier symbol), Silver Cup, English Flag, Spanish Flag, German Flag and Football symbols. For a look at the Slota Bonita online slot, a screenshot has been provided below: 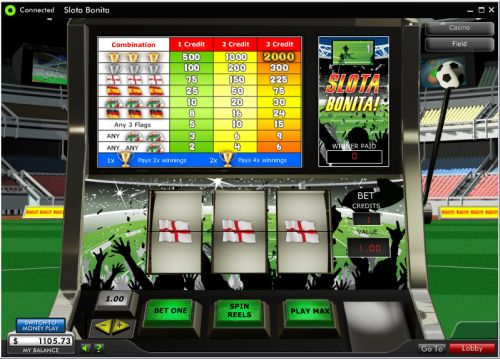 The top paying symbol on the Slota Bonita casino game is the Gold Cup symbol. On the maximum bet, 3 Gold Cup symbols will pay out the 2000 coin top jackpot. The Gold Cup is wild and will multiply winnings by 2X for one symbol or 4X for two symbols. Use this symbol to win big on Slota Bonita at Bovada!

Slota Bonita is a very well executed football-themed classic slot that football fanatics will get a kick out of. It looks great and has some decent payouts. You can play the Slota Bonita classic slot when you sign up and make a deposit at Bovada.

Unfortunately, American players are unable to play the Slota Bonita slot game for real money at this time. However, players based in the United States of America are welcome to read our USA-friendly Global Cup Soccer Classic Slot Review and also play the slot game at Rival-powered casinos including Bovada.

Where can I play a flash game of the Slota Bonita free slot?

You can play a flash or instant play version of Slota Bonita for free or real money at 888 Casino. If you experience difficulties with the online flash game, make sure you have the newest edition of Adobe Flash Player installed.

Alternative Ways To Ask/Incoming Search Traffic:
The answer to the question Slota Bonita! Classic Slot Review is also applicable for the following questions: