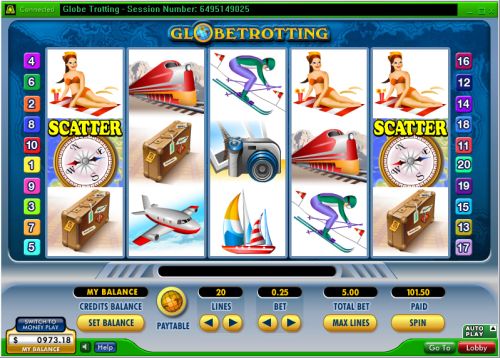 When the Scattered Compass symbols appears on reels 1 and 5 at the same time, you will trigger Globetrotting’s Frequent Flyer bonus game. There will be many different locations around the world, including New York, Los Angeles, Rio De Janeiro, Buenos Aires, London, Moscow, Cape Town, Shanghai, Tokyo and Sydney. You will have 3 flights to accumulate the highest possible number of frequent flyer bonus miles. Bonus points will multiply your original total bet on all paylines. For a look at the Frequent Flyer bonus game, a screenshot has been provided below: 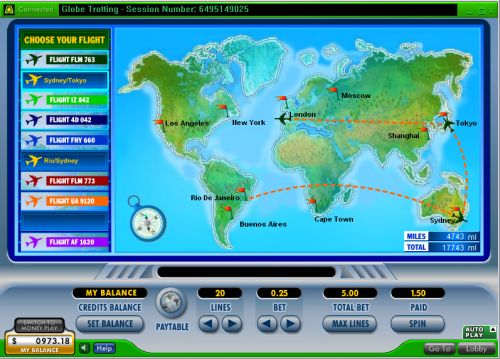 Globe Trotting has a simple autoplay mode found near the bottom-right of the game screen. You can type in from 1-99 autoplay spins. When you have selected your number of spins, press either “Spin” or “Max Lines” to spin the reels. You can stop autoplay on the Globe Trotting online slot at any time.

Globe Trotting is missing some regular video slot features that players are used to, but it has two bonus games and a 12,000X top payout that should more than make up for any shortcomings. You can play the Globe Trotting online slot game for real money by signing up and making a deposit at Bovada!

No, players based in the United States cannot play the Globe Trotting slot game for real money. For an excellent alternative, we recommend you read our Spin the World CTXM Slot Review or play it at Bovada.