Pacific Attack is a World War II themed video slot. Symbols on the Pacific Attack video slot include the Fighter Plane (bonus symbol), Pilot (wild symbol), Girl (scatter symbol), Mine, Parachute, Bombs, Hat, Cross Medal, Star Medal, Service Medal and War Medal symbols. The art is made to look like it was from the WWII-era. It’s in full colour, but the art has the style you would expect from a WWII era video slot. Many of the symbols are animated with sound effects. For a look at the Pacific Attack video slot from Net Ent, a screenshot has been provided below: 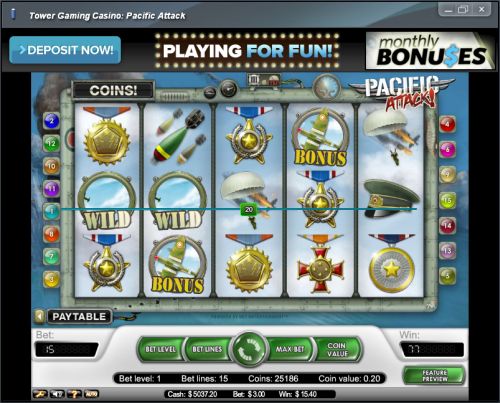 Coin values on the Pacific Attack slot machine are $0.01, $0.02, $0.05, $0.10 and $0.20. You can select from 1-15 paylines at 1-20 coins (or “Bet Levels”) per line. The lowest bet you can make on the Pacific Attack slot game is a penny per spin up to the maximum total bet of $60 per spin. With a betting range such as this, any type of player from casual player to high rollers should be able to enjoy the Pacific Attack online slot game. You can skill stop the reels during a spin if you hit the Spin button again in the middle of a spin. To play Pacific Attack, select your bet and hit the Spin button or you can play all 15 lines and the highest Bet Level by hitting the “Max Bet” button.

The scatter symbol on Pacific Attack is the Girl symbol. 2, 3, 4 or 5 Scattered Girl symbols will pay out 2X, 4X, 50X or 200X your total bet. Also, 3, 4 or 5 Scattered Girl symbols will win you 10, 20 or 30 free spins with a 3X multiplier. All of your winnings will be tripled during the free spins feature, except for bonus game winnings and additional free spins. Thanks to the 3X multiplier, you can win lots of cash on Pacific Attack if you trigger this feature at Bovada! 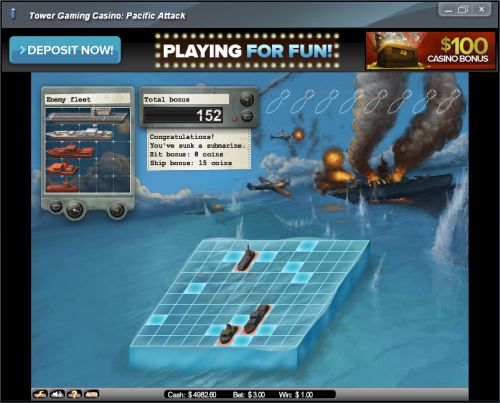 If you’re interested in the Second World War or maybe you’re just an avid player of Battleship, Pacific Attack has got something for you. Even if neither of those are among your interests, you’ve still got a free spins feature with triple winnings and a good 5000 coin top payout. To play the Pacific Attack video slot, you can sign up and make a deposit today at Bovada!

Where can I play a free Flash game of the Pacific Attack online slot?

You can play a Pacific Attack Flash game right here at Casino Answers! Just head over to our Flash games section where no signup is required! If you experience issues with the Flash software, make sure you have the latest version of Adobe Flash Player installed.

Can players from the US play the Pacific Attack slot game for real money?

Unfortunately, American players cannot play the Pacific Attack slot for real money. For a great selection of video slots and slot machines that are USA-friendly, please read our list of Rival slots.

Battleship flash game, what is that battleship slot?