If you still think that Saturday Night Fever, pet rocks and lava lamps are fab, then you’ve got a craving for the 1970’s. The Funky Seventies brings many of the great things people are nostalgic about from the 40 years ago and converts it to video slot form. The first thing you’ll notice on The Funky Seventies is the never-ending disco loop that plays at all times while you’re playing the slot game. Other things you’ll notice are the symbols. There’s the 70’s Wild symbol, Scattered Girl with an Afro symbol, Dodge Charger, Computer, Disco Ball, See-O-Matic, Cassette Tape and Ace, King, Queen and Jack symbols. For the skinny on the Funky 70’s slot game from Net Ent, a screenshot is below. 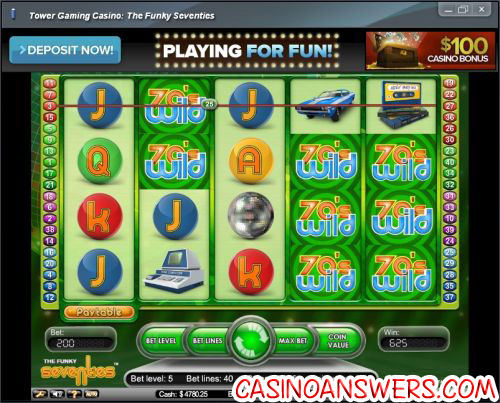 Winning combinations and payouts are made according to the Paytable. Payline wins are multiplied by the bet per payline. Wild symbol substitutes for all symbols except scatter symbols. Multiple wild symbols on each reel line up to create stacked wilds. Scatter wins are paid independent of bet lines selected. Only the highest win per active payline will be paid out. Payline wins pay if in succession from leftmost to right. Simultaneous wins on different paylines are added. For the majority of the payout schedule, a screenshot of the Funky Seventies Paytable is below. 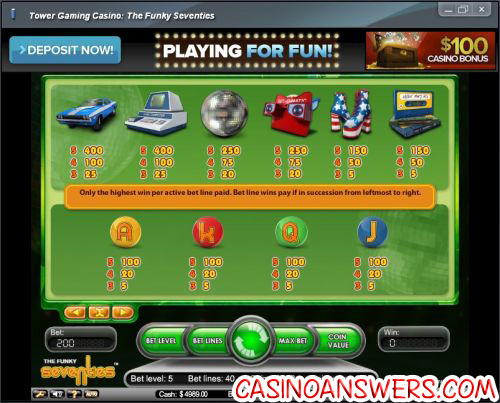 Where can I play a Funky 70’s Flash game for free?

You can play a Flash game of the Funky 70’s online slot game for free or for real money at Tower Gaming Flash Casino and Casino Euro. If you experience problems with the Instant Play casino software, try downloading the latest version of Adobe Flash Player.

Unfortunately, players from the United States are out of luck when it comes to playing this game for real money. You can still play all the great classic slots, video slots and interactive slots at the USA-friendly Slots Jackpot Casino!

What’s the best way for Macintosh users to play The Funky Seventies?

Where else can I play the Funky 70s video slot?

If you are looking for another casino besides Tower or Casino Euro to play at, you can read our Betsson Casino Review for an alternative.