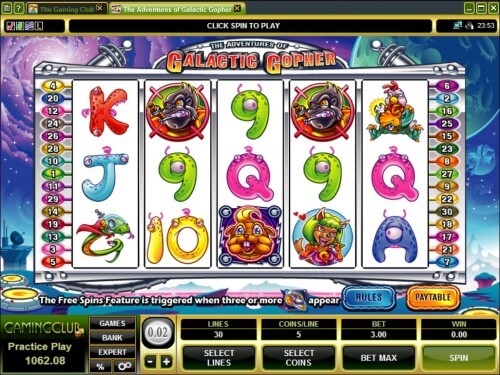 The Galactic Gopher casino game is a penny slot. Coin sizes on the Galactic Gopher slot machine include $0.01, $0.02, $0.05, $0.10 and $0.20. You can select up to 30 paylines at 1-5 coins per spin. The maximum total bet available on the Galactic Gopher online slot is $30, which is a low betting range that is best for casual players. To play the Galactic Gopher video slot, select your bet and press the “Spin” button. Players looking to play all 30 lines with 5 coins bet per line, you can use the “Bet Max” button to spin the reels.

The Gorilla is the top-paying symbol in The Adventures of Galactic Gopher. If you hit 5 Gorilla symbols on a selected payline, you will win the 2500 coin top jackpot. The second highest payout is the Dog symbol, which can pay out up to 750 coins. 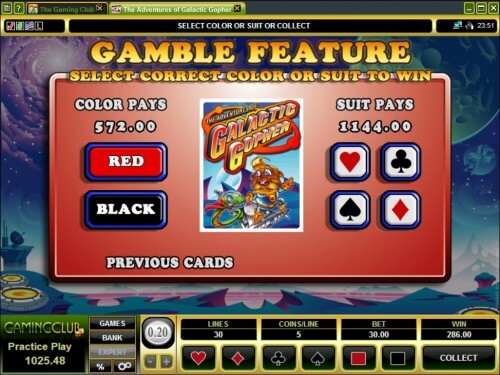 Payouts are made according to the Paytable. Payline wins are multiplied by the bet per line. Scatter wins are multiplied by the total bet. Scatter wins are added to payline wins. All symbols pay left to right, except for the Scattered Ship symbol (which pays any). Only the highest win is paid per selected payline. Coinciding wins on different selected paylines are added. The Galactic Gopher wuld symbol appears on reels 2-4 only and will substitute for all symbols except for the scatter symbol.

No, American players cannot play the Adventures of Galactic Gopher video slot for real money at Microgaming casinos. Instead, we suggest you visit Bovada for some great USA-friendly video slot machines.

Where can I read more sci-fi themed slot reviews?

If you’re into science fiction, you can read some more sci-fi slot reviews on our list of sci-fi online slots.