Santa Paws is a 5-reel, 20-line video slot developed by Microgaming, featuring a wild symbol, scatter wins, multipliers, a free spins feature and a gamble feature. You can play the Santa Paws video slot at Bovada.

Santa Paws is a Christmas-themed video slot starring a Polar Bear as “Santa Paws” and other arctic animals as characters. Symbols included in Santa Paws are Santa Paws (wild symbol), Penguin (scatter symbol), Rudolf, Arctic Fox, Seal, Owl, Rabbit and Ace, King, Queen, Jack and Ten symbols. For a look at the Santa Paws video slot, a screenshot has been provided below: 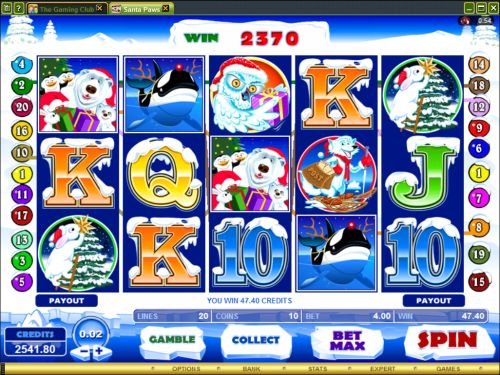 The Penguin is the scatter symbol on Santa Paws and will pay up to 100X your total bet for 5 scatter symbols. If 3 or more Scattered Penguin symbols land on the reels of the Santa Paws Christmas slot, you will win 12 free spins at up to 7X multiplier. During the free spins feature, the Rudolf and Santa Paws symbols will substitute for all symbols except for the Scattered Penguin symbol. All bets and lines played are the same as the game that started the free spins feature. 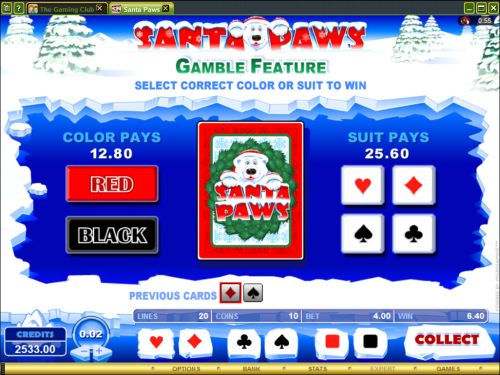 Santa Paws has a fun Christmas theme that is enjoyable. It has some decent payouts and a free spins feature with a very good muliplier. You can play the Santa Paws video slot when you sign up and make a deposit at Bovada.

Can players from the United States play the Santa Paws video slot for real money?

No, Americans cannot play the Santa Paws slot game for real money. You can play many different X-Mas themed slots when you play at Bovada.

Can I play a Santa Paws slot game in Instant Play in my browser?

Yes, you can find the Santa Paws online slot game on the third page of the Instant Play Flash casino at Bovada. You can play for free or real money. If you have any problems with the instant casino, make sure you have the latest version of Adobe Flash Player.