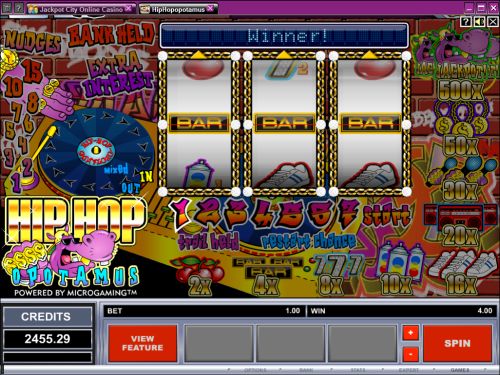 The Trail Ladder is located below the game reels on the HipHopopotamus slot game. If a symbol is labeled with a number, you will advance positions on the Trail Ladder. You will only retain the position on the next spin if “Trail Held” lights up (randomly).

If you trigger the Hi/Lo bonus game on HipHopopotamus, you will be taken to a screen with a 7×7 grid. You will then be given a number and you must predict whether the next number will be higher or lower. If you’re wrong, the bonus game will end. If you guess correctly, you will move onto the next square and have the option of either accepting your prize or moving on and trying to win a better prize. There are 12 different bonus features as well as 6 bonus squares that you can win. For a look at the Hi/Lo bonus game, a screenshot has been provided below: 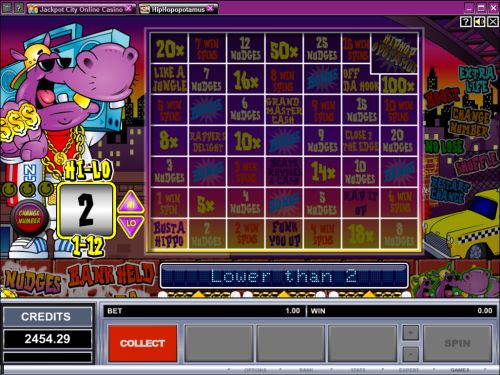 Another random special feature on the HipHopopotamus fruit machine is the Shifta! feature. One reel will be held while the other reels will spin into an automatic winning combination.

Similar to the Shifta! feature, the Funk You Up feature is randomly awarded after a losing spin on HipHopopotamus. The various regular symbol names flash randomly in the information window until you hit the “Stop” button. The reels automatically spin in the symbol combination you stopped.

Nudges are randomly triggered features on the HipHopopotamus slot machine. You can win up to 15 nudges at a time. Use the arrows at the top of the reels to choose which reel you wish to bump. There is also the Nudge Bank Held feature where you can save your nudges for your next spin and Extra Interest Nudges where you can win more nudges when your nudges are banked.

As you can expect from a fruit machine, HipHopopotamus has a hold feature, which is another random special feature. The “Hold” buttons appear below the reels. You can hold one or more reels in the same position for the next spin. If you change your mind and don’t want to hold a held reel, hit the “Cancel” button.

Can I play a free Flash game of the HipHopopotamus fruit machine for real money?

Where can I read more fruit machine reviews?

For more fruit machine reviews from Microgaming and other online casino platforms, please read our list of fruit machines.

Alternative Ways To Ask/Incoming Search Traffic:
The answer to the question HipHopopotamus Fruit Machine Guide & Review is also applicable for the following questions: