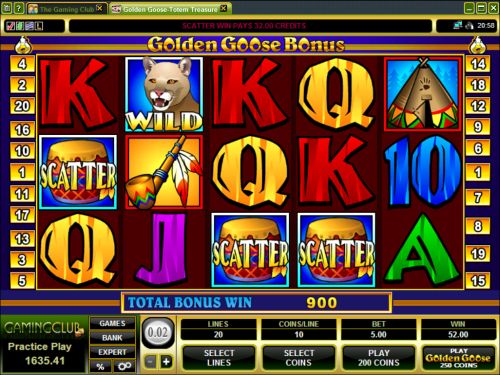 Totem Treasure’s top-paying symbol is the Squaw symbol. If 5 Squaw symbols appear on a selected payline, you will win the 12,000 coin top jackpot. This is an exceptional top payout, which backs up the “treasure” part of the name. The Squaw symbol is a wild multiplier and will substitute for all other symbols on the Golden Goose: Totem Treasure video slot, except for the Scattered Drum symbol. When the Squaw wild symbol substitutes in a winning combination, your winnings will be doubled. The Squaw will change into a Cougar symbol when it appears in a winning combination. Other high paying symbols include the Tipi (2000 coins) and Campfire (1000 coins).

If you play with the Golden Goose feature turned on, the Golden Goose may appear randomly after any spin, awarding you one of four bonus features. The first is a bonus game where you can select a card to win up to 11 free spins at a 6X multiplier. Another feature turns the symbols into golden eggs and you will be able to choose one egg from each reel to win up to 5000 coins (in total). The third bonus game will give you the option of choosing the cash to win up to 10,000 coins or the egg to win up to 50 free spins at a 3X multiplier. Finally, in the fourth feature, the Golden Goose can award you a prize of up to 2000 coins. For every free spin, you are awarded two coins multiplied by the bet per line and the multiplier you have been awarded. All bets and lines played during the free spins feature are the same as the game that started the feature. Wins shown in the bonus game have been multiplied by the bet per line. Bonus wins are added to payline wins. For a look at the Golden Goose feature, a screenshot has been provided below: 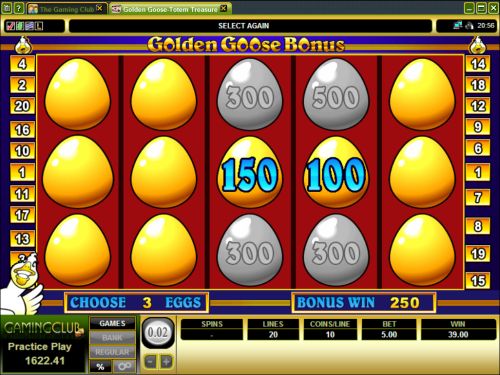 Payouts are displayed on the Paytable. Only the highest win is paid per selected payline. All wins pay left to right and right to left. The Squaw symbol is wild and will substitute for all symbols except for the scatter symbol.

Golden Goose: Totem Treasure has an autoplay feature with advanced settings. To use the autoplay mode on the Totem Treasure online slot machine, you must hit the “Expert” button. You can now play 5 or 10 autoplay spins. For advanced settings, hit the “AutoPlay” button and you can now play 5, 10, 25, 50, 100, 250 or 500 autoplay spins and stop autoplay if a win exceeds or equals $100, $500, $1000, $5000 or $9999. Autoplay will always play the Golden Goose sidebet. Autoplay will stop on any feature contained in the game. You can stop autoplay at any time on the Totem Treasure slot game.

The Golden Goose feature really spices up what was once a featureless Totem Treasure video slot. We definitely recommend playing this version of the Totem Treasure slot game rather than the original 5-line video slot, although you can play that version as well at Bovada!

No, American players cannot play the Totem Treasure online slot for real money. Instead, we recommend that you read our Fire Hawk Video Slot Review.

How do I get one of the Golden Goose special features?