Totem Quest has a Native American theme, more specifically featuring the different sculptures that make up the totem poles that are found in the Pacific Northwest. Symbols in the slot game are various totems, tiles as well as scatter and bonus symbols. The Totem Quest video slot is very bright with lots of purple, blue, green, red and yellow. There are lots of Native-style sound effects used as well. Below is a screenshot of the Totem Quest slot game: 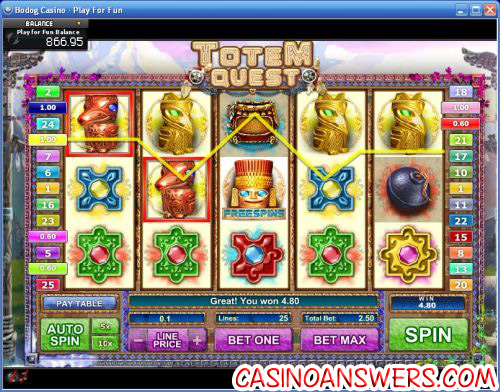 Bets on the Totem Quest slot machine are $0.05, $0.10, $0.25, $0.50, $1, $2 and $5 per line. You can play up to 25 paylines. The lowest total bet you can make on the Totem Quest video slot is a nickel per spin up to the highest total bet of $125 per spin. No matter if you are looking to bet high like a high roller to low like a casual slots player, Totem Quest will have the bet for you. To play Totem Quest with all 25 paylines, hit the “Bet Max” button. For other bets, hit the “Bet One” button to select your number of paylines followed by “Spin.” 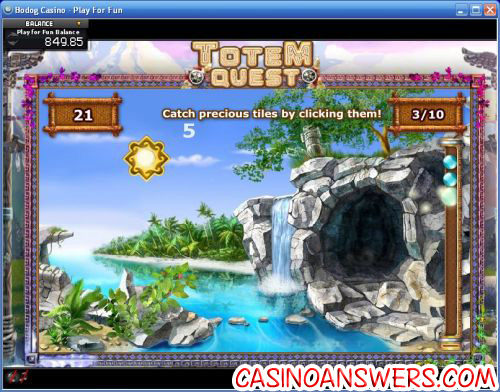 Payouts are made according to the paytable. Payline wins are multiplied by the bet per line. All symbols pay left to right. Only the highest win is paid on each of the active paylines Coinciding wins on different active paylines are summed up.

Totem Quest has an autoplay feature where you can play 5 or 10 autoplay spins with a click of a button or hit the “Auto Spin” button to play 5, 10, 20, 50 or 100 autoplay spins. You can cancel Totem Quest’s autoplay mode at any time by clicking anywhere on the screen or hitting the “Stop” button.

While Totem Quest lacks basic video slot features such as wild symbols and scatter wins, Totem Quest does bring three unique bonus games along with a free spins feature to the table. To play the Totem Quest video slot, sign up and make your first deposit today at Juicy Stakes Casino!

If I’m located in the United States, can I play Totem Quest for real money?

USA players are definitely allowed to play Totem Quest at their choice of Juicy Stakes Casino and Bovada.

Where can I play a free Flash game of the Totem Quest slot machine?

You can play Totem Quest at Juicy Stakes Flash Casino and Bodog Flash Casino for free or for real money. If you experience any issues with the Flash software, try installing the latest version of Adobe Flash Player.

How do I trigger the bonus games on the Totem Quest video slot?

To trigger one of the three bonus games on the Totem Quest slot machine, you must hit 3 of one of the following symbols on an active payline: Bag, Bomb and Totem Quest symbol.

Where to play the Totem Quest Flash Game?