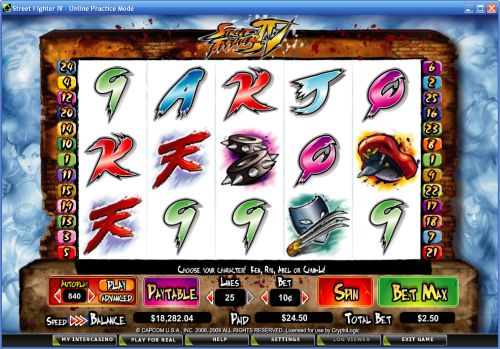 M. Bison’s Hat is the top-paying symbol on the Street Fighter IV slot game. If 5 M. Bison’s Hat symbols appear on a selected payline, you will win the 5000 coin top jackpot. The next highest paying symbol is the Vega’s Mask & Claws symbol, which can pay out up to 2500 coins. You can win these payouts by playing the Street Fighter IV video slot at Bovada!

The Yin Yang is the wild symbol on the Street Fighter IV video slot. It only appears on reels 2 and 4 and will substitute for all symbols except for the Scattered Logo.

The scatter symbol is the Street Fighter IV Logo symbol. When two or more scatter symbols appear on the reels, you can get a scatter payout of up to 200X your total bet. When three or more Scattered Logo symbols appear on the reels, you will trigger the Street Fighter IV feature. You will get to choose your character between Ken (extra free spins), Ryu (multiplier), Abel (win repeater) or Chun-Li (extra Chun-Li symbols). Press the “Stop” button to select an Ultra Combo, Kick or Punch. You will be awarded 10 free spins with the chosen character replacing the Yin Yang as the wild substitute symbol. The free spins may be enhanced with multipliers, additional free spins or additional wild substitute symbols that will be determined with your attack. If your enemy wins, you will win 10 free spins with no enhancements. The Street Fighter IV feature cannot be re-triggered. Free spins are played at the lines and bet of the triggering game. Free spins feature wins are added to payline wins and scatter wins. For a look at the Street Fighter IV bonus game, a screenshot has been provided below: 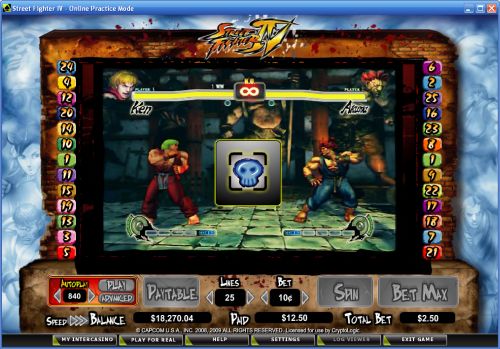 Payouts are displayed on the Paytable. Payline wins are multiplied by the bet per line. Highest win amount is paid on each selected payline. Scatter wins are multiplied by the total bet and added to payline wins. Feature wins are added to scatter and payline wins. Win combinations pay from left to right only, except for the Scattered Logo. Yin Yang symbol appears on reels 2 and 4 only and substitutes for all symbols except for the Scattered Logo.

Can players from the USA play the Street Fighter IV online slot game for real money?

No, American players cannot play the Street Fighter IV slot machine for real money at this time. Instead, you can play the Rival iSlots and other video slots over at Bovada.

Can I play a free Street Fighter IV flash game in my browser?

You can play a flash game of the Street Fighter IV video slot for real money only at Bovada. If you have any difficulties with the flash casino, make sure you have the newest version of Adobe Flash Player installed on your computer.