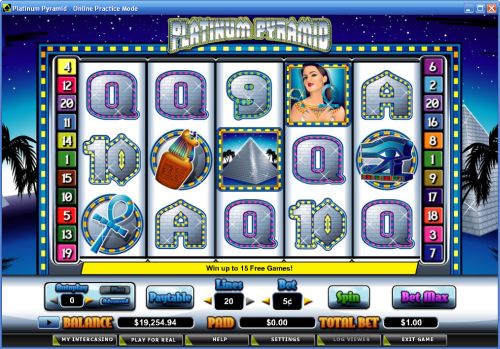 Platinum Pyramid’s scatter symbol is the Pyramid. 2, 3, 4 or 5 Scattered Pyramids on the reels of Platinum Pyramid will pay out 1X, 5X, 20X or 150X your total bet. When 3, 4 or 5 Scattered Pyramid symbols appear on the reels, you will win 5, 10 or 15 free spins with a 3X multiplier. All prizes during the free spins feature are tripled. The feature can be re-triggered. Free spins are played at the lines an bet of the triggering spin. Free spin wins are are added to payline and scatter wins. With a 3X multiplier, you can go platinum on the free spins feature when you play Platinum Pyramid at Bovada! 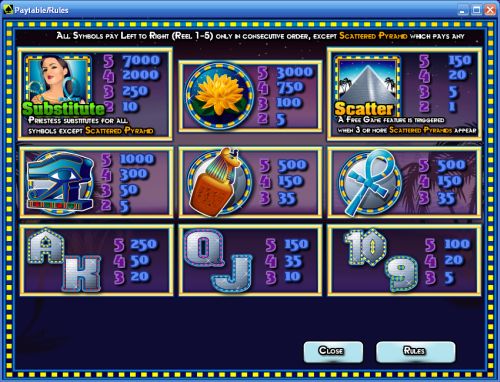 The highlights of the Platinum Pyramid video slot are the 3X multiplier on the free spins feature and the fairly good 7000 coin top payout. It has some other good payouts to back up the top jackpot as well. If you like playing Egyptian slots, Platinum Pyramid should be no exception. You can play it for real money by signing up and making a deposit at Bovada.

No, American players cannot play Platinum Pyramid for real money at Cryptologic online casinos at the moment. Fortunately, they can head over to Bovada and play some of the many great slot games over there.

Is there an Instant Play version of the Platinum Pyramid video slot?

You can play Platinum Pyramid in your browser with no download required at Bovada. You can play for real money only. If you experience any difficulties with the Instant Play casino, make sure you have the newest edition of Adobe Flash Player installed on your computer.

Where can I find more Egyptian slot reviews?