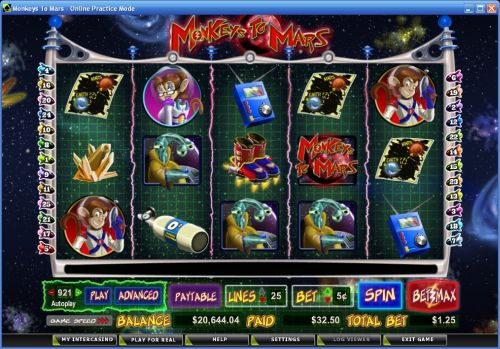 The Launch Button is the wild symbol on the Monkeys To Mars video slot. It is an expanding wild so whenever it substitutes in a winning combination, all of the symbols on the reel will become wild symbols. It only appears on reels 2, 3, 4 and 5. You can win lots of cash with the expanding wild when you play the Monkeys To Mars video slot at Bovada!

The Rocket Re-Spin feature is triggered at random and occurs on reels 2, 3 and 4 only. During a reel re-spin, all of the Purple Crystal symbols on that reel will become Launch Button symbols. The initiating game outcome is analyzed for payouts, then 1, 2 and/or 3 or the reels will re-spin. The initiating game outcome is then added to the re-spin feature outcome. The Asteroid bonus game feature cannot be triggered during Rocket Re-Spins.

When 3 Alien symbols appear on reel 2, 3 and 4, you will trigger the Asteroid bonus game. Asteroids will head towards you and you must select 5 Weapons to fire to win prizes. Feature prizes are added to the initiating game awards. The bonus game cannot be re-triggered. For a look at the Asteroid bonus game, a screenshot has been provided below: 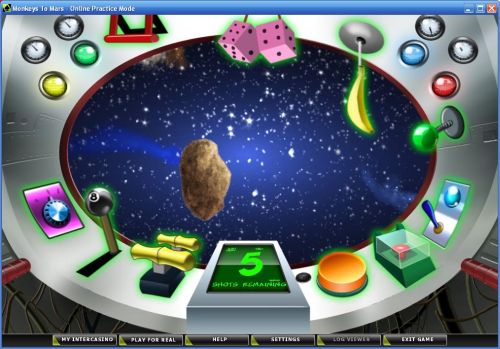 Payouts are displayed on the Paytable. Payline wins are multiplied by the bet per line. Highest win amount is paid on each selected payline. Scatter wins are multiplied by the total bet and added to payline wins. Winning combinations pay from left to right, except for scatter wins. The Launch Button appears on reels 2-5 only and substitutes for all symbols except for the Alien and Monkeys To Mars symbol. The Alien appears on reel 2, 3 and 4 only.

You can use the Monkeys To Mars autoplay mode by selecting up to 999 autoplay spins and hitting the “Play” button. You can also hit the “Advanced” button to access its advanced features. You will be able to select stop settings including cumulative win or loss of up to $5,000, single win of up to $5,000 or upon completion of free games. You can stop the autoplay mode on the Monkeys To Mars video slot at any time.

Monkeys To Mars has a fun combination of two themes – a sci-fi theme combined with a monkey theme. It’s sure to be a winner to people who like monkeys (and who doesn’t?) and perhaps fans of the sci-fi genre as well. It’s also got a lot of special features like the bonus game, expanding wilds and re-spin feature. The main negative we see in it is its low top payout of 2,000 coins. Fortunately, the positives far outweigh the negatives, even if there is no weight in space. You can blast off with the Monkeys To Mars slot game when you sign up and make a deposit at Bovada!

Can players from the USA play the Monkeys To Mars video slot for real money?

Unfortunately, American players are unable to play the Monkeys To Mars online slot game for real money at this time. For a great selection of USA-friendly slots you can play, please check out our Rival slots list or simply play them now at Bovada!

Can I play an Instant Play version of Monkeys To Mars for free?

You can play an Instant Play version of the Monkeys To Mars video slot at Cryptologic online casinos such as Bovada for real money only. If you experience any issues with the Instant Play software, make sure you have the latest version of Adobe Flash Player installed on your computer.

Where can I play more sci-fi themed slot games?

You can find lots of exciting slot machines and video slots with all types of different sci-fi themes in our list of Sci-Fi slot games.

Alternative Ways To Ask/Incoming Search Traffic:
The answer to the question Monkeys To Mars Video Slot Guide & Review is also applicable for the following questions: