Green Lantern is a character from the DC Comics universe who dates back all the way to July 1940. Green Lantern has a power ring, which gives him his powers. Some of the many powers the ring has are flight, time travel, force fields, invisibility and teleportation. Symbols on the Green Lantern DC video slot include: Green Lantern, Power Ring, Sinestro, Ganthet, Battery and others. The many of the symbols become animated with sound effects on winning combinations. Unlike most 5-reel video slots, there are 4 rows rather than the usual 3. Here is a screenshot of the Green Lantern video slot: 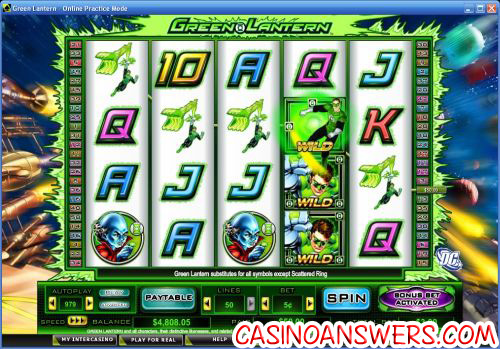 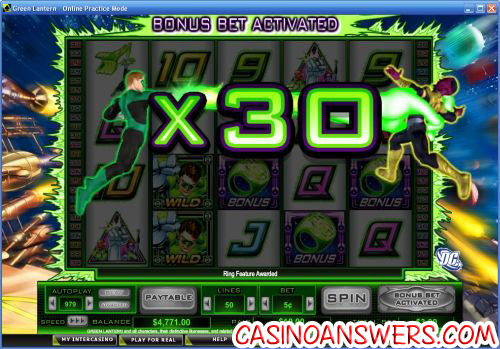 Payouts are displayed on the Paytable. Payline wins are multiplied by the amount bet per line. The highest win amount is paid on each selected payline. Scatter wins are multiplied by the total bet and added to payline wins except when playing the Bonus Bet. Feature wins are added to scatter wins and payline wins. Winning combinations pay from left to right, except for the Scattered Ring symbol. The Green Lantern symbol appears on reels 2 and 4 only and substitutes for all symbols except for the Scattered Ring symbol. The prize is doubled when Green Lantern substitutes in a winning combination.

Are players from the United States able to play the Green Lantern video slot?

Unfortunately, USA players cannot play at Cryptologic online casinos for real money at this time. For some equally great video slots with a ton of features like skill-based bonus games and free spins, we recommend that you check out the iSlots at the US-friendly Pantasia Casino.

Where can I read more comic book slot reviews?

Where can I play a Flash game of the Green Lantern slot for free?

Due to the fact that it was just recently added to the game library, the Green Lantern video slot has not added it to the Instant Play casino at this time. Instant Play is only available to real money players at InterCasino.

Alternative Ways to Ask/Incoming Search Traffic:
The answer to the question Green Lantern Video Slot is also applicable for the
following questions:

How do I beat the Green Lantern slot machine?