Captain America is a 5-reel, 3-row, 25-line video slot based on the popular Captain America Marvel Comics series. It has scatter symbols, wild substitutes, a bonus game feature and three progressive jackpots. It is part of the Cryptologic Marvel Jackpot series and can be played at InterCasino.

The Captain America Marvel slot launched in 2007, so it’s not as slick graphics wise as some of the newer offerings. However, we can’t say it looks bad by any means… It’s got some nice looking comic book art with symbols such as Red Skull, Captain America’s shield, an army helmet and boots, a classified top secret folder, the Super-Soldier Serum, the Star-Spangled Banner and the Statue of Liberty. The scatter symbol is a Captain America logo. The wild substitute symbol is Captain America himself throwing his shield. Here’s what the video slot looks like when he’s throwing his shield at you: 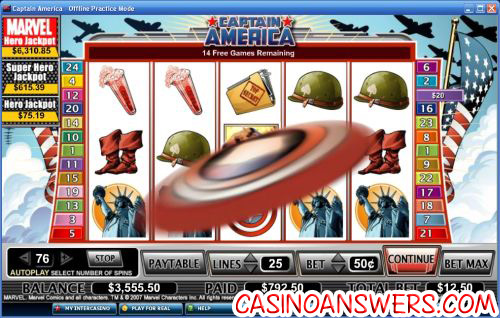 Captain America has a bonus game feature. It’s triggered when you have three or more scatter logos appear on a spin. There are a bunch of planes flying overhead, and you must choose which one you want Captain America to throw his shield at. The plane blows up, and you win a prize. If you happen to blow up Red Skull’s plane, all of your prizes will be doubled and you will win 15 free spins. You cannot retrigger the bonus game during your free spins. The free spins will be played at the lines and bet of your triggering spin. Prizes will be multiplied by your triggering bet. The bonus game and free spin prizes will be added to your line and scatter wins.

The bonus game isn’t challenging at all, but more fun than your basic video slot bonus game. Also, you can win big, much like I did by hitting Red Skull’s plane: 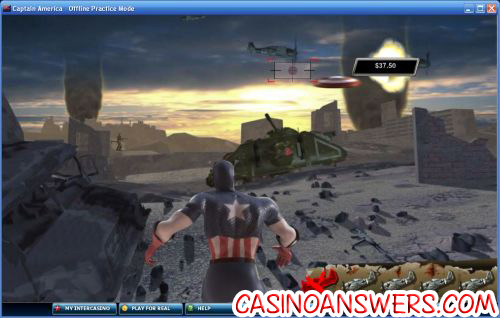 Captain America is a fun Marvel Jackpot video slot with lots of chances to get some big wins (as shown above). We recommend you head over to InterCasino and take advantage of their 100% up to $225 signup bonus so you can have $450 to play Captain America and several other Marvel Comics and DC Comics video slots.

I’m a US-based player. Is there an online casino where I can play the Captain America Marvel Jackpot slot machine?

Regretfully, none of the Cryptologic casinos where you can find the Captain America slot machine game are accepting players from the United States at the moment. However, you can find a lot of other excellent video slots at Vegas Technology online casinos such as Millionaire Casino.

Is there a Captain America Marvel Slot Machine? What marvel slot machines are there? Is there an Avengers video slot?