Traditional Keno, which is designed liked an ordinary lottery ticket and is somewhat fused with some elements of bingo game, is a casino game made by Betsoft Gaming.

Traditional Keno is among the numerous different variants of keno and it is related to versions like Klub Keno, Instant Keno, and Cleopatra Keno. “Keno”, which is an American English word whose first usage dates back to 1800s, was derived from “quine” —French term meaning five winning combinations —and “quinque” —Latin term meaning something with five sections.

Migrating Chinese brought keno to the US. The ancient version of keno had 120 balls or equivalent characters, but the number has since been reduced, wherein most current keno variants have 80. The numbering on Traditional Keno is 1-80. After staking, players click their desired numbers, which is strictly 2 numbers (minimum) and 10 numbers (maximum).(Get 20 free spins on the Mariachi 5 slot, win real cash. Click here and use code DANSPINS20 during signup.)

Traditional Keno is among keno versions with some of the lowest possible amount of ante bets because players can bet merely $0.02—players can stake up to $1.00. There is no need for players to keep on choosing their preferred numbers in every round. Players can select numbers then click “Play Ten” icon so as to play ten rounds back-to-back without necessarily choosing new numbers in between the ten rounds.

By the same token, there is also a “Play Five” icon. Otherwise, Traditional Keno players can also decide to click “Play One” for single rounds. If a player chooses to play ten games consecutively, it might be hard to memorize the hits in a given round of Traditional Keno.

Fortunately, the software is designed to not only display the hits in a particular round, but also show the player which round is presently playing; for instance, it can show thus: “playing round 2…” 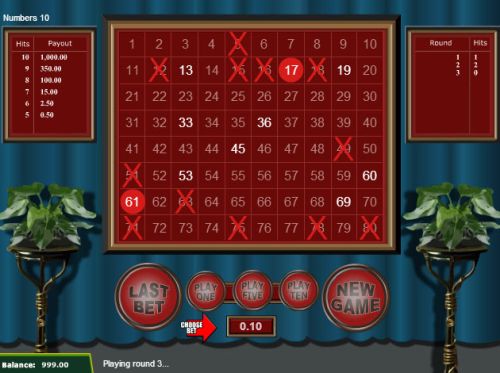 Another appealing thing about Traditional Keno is its highest possible payout. Players can ably get an optimum payout amounting to 10,000 times their bet if they perfectly predict and get ten hits in all ten rounds. The hit-payout structure is also well laid out; the chart on the left side shows the number of potential hits and corresponding payout.

On the flip side, the graphical aspect of Traditional Keno is so basic such that there are no icons for increasing or reducing the bet amount. To adjust the bet, a player has to keep on pressing the bet button below the “Play Five” icon. Pressing the central part of the bet icon increases the bet while pressing its left side decreases it. It can be tricky for new players— unless they have seen a quick demonstration.

In Traditional Keno, luck is instrumental just like in other keno variants, wherein any particular number has an eightieth chance of being chosen. Therefore, this invalidates any imaginable strategy, especially anything that recommends choosing specific numbers. Popular opinion on keno variants, including Traditional Keno, shows RTP in the range of 65-80 per cent, whereas the house edge is in the range of 20-35 per cent.

Alternative Ways to Ask/Incoming Search Traffic:
The answer to the question Traditional Keno is also applicable for the following questions: