Hockey PotShot is a specialty game developed by CTXM. It is a variation of the Japanese game Pachinko, which is a vertical pinball game. You can play Hockey PotShot at US-friendly online casinos Juicy Stakes Casino and Bovada.

Hockey PotShot is a Pachinko game styled after hockey. The layout of the game is a hockey rink. The shooter is located at the top and the pockets are located on the net at the bottom.

To play Hockey PotShot, you must select one of three different bumper formations. Each formation is made up of 11 bumpers. Once you have chosen a formation, you can choose how many pucks you wish to play (up to 99) and how much you wish to stake per puck. The game will list the total stake below. The minimum bet is $0.10 per puck. 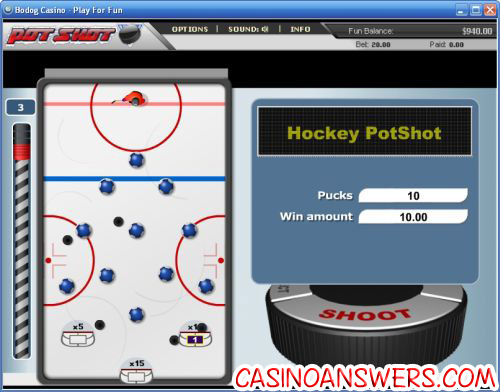 To start the game, hit the “Play” button. The shooter will move back and forth at a reasonable speed. When you like the angle the launcher is at, hit the “Shoot” button to launch a puck. The puck will then bounce of the walls and bumpers. If the puck falls into one of the pockets, you will win the number of pucks listed on that pocket. If the puck misses all of the pockets, you will not win any puck. You may shoot as many pucks as you wish at a time. The pucks will not bounce off eachother or affect the other pucks in any way.

After each round of Hockey PotShot, if you have won, you will have the choice of cashing out the win amount or playing another round with the number of pucks you have won. If none of the pucks go into the pockets, you will be taken back to the starting game screen.

Hockey PotShot is a lot of fun to play and is very different from most online casino games. If you’re looking for the best place to play the Hockey PotShot Pachinko game at, we recommend that you try Juicy Stakes Casino and make sure you use the bonus code coupon DealerDan when you sign up!

Players based in the United States can play Hockey PotShot, Soccer Shot and much more at both Juicy Stakes Casino and Bovada Casino.

Is there a Flash version of Hockey PotShot available?

Yes, Bodog Casino has a Flash version of its casino for Macintosh users and other players who don’t wish to download their spyware-free casino software. If you experience any issues playing the Hockey PotShot Flash game in your browser, make sure you have the latest version of Adobe Flash Player installed.

Are there any other Pachinko games I can play?

What NHL casino games are there? What hockey flash games can I play online? Are there any Pachinko casino games?

﻿In 1984, Trump Plaza opened in Atlantic City. In 2011, Casino Software Provider Vegas Technology closed their doors to all new players.