As evident by the name of the slot machine, T-Rex is a dinosaur-themed video slot. “T-Rex” is short for Tyrannosaurus Rex (which is Latin for “tyrant lizard king”). Other dinosaurs featured in the T-Rex video slot are the Stegosaurs, Triceratops and the Ankylosaurus. Other symbols included ar the Scattered Egg symbol, a Volcano symbol, a Prehistoric Plant symbol and Ace, King, Queen, Jack, Ten and Nine symbols. 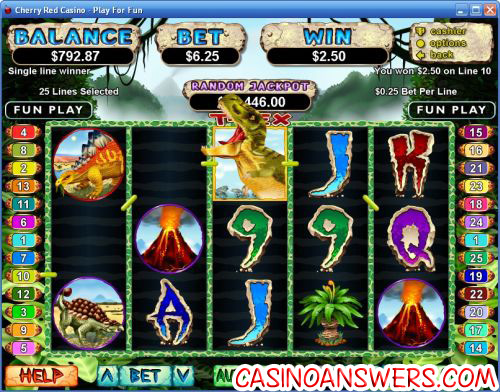 The Egg symbol is the scatter symbol on the T-Rex video slot. Scatter wins are multiplied by the total bet. 3 or more Scattered Egg symbols anywhere on the reels and you will trigger T-Rex’s free games feature. You will have to select each of the Scattered Egg symbols to reveal up to 10 free games per egg. When the T-Rex symbol appears on the third reel during the free games feature, he will eat the other dinosaur symbols on the reels and replace them with T-Rex symbols before winnings are awarded. The free spins feature can be re-triggered. Free spins are played at the paylines and bet of the triggering spin.

5 T-Rex symbols on an active payline during the free spins feature will win you the T-Rex video slot’s top fixed jackpot of 10,000X your line bet. You can only win the top fixed jackpot during the free games feature. The T-Rex symbol will only appear on the third reel during normal games and substitutes for all other symbols except the Scattered Egg symbol. When the T-Rex participates in a winning combination, your winnings will be doubled.

The T-Rex video slot game has a skill stop feature. During any spin of the reels, you can hit the “Stop” button (in place of the “Spin” button) to bring the reels to a complete halt. The game will pay out any winnings from winning combinations. Skill stop is available in autoplay, but not in Turbo Play.

The T-Rex slot machine has an autoplay mode that is found with the rest of the game buttons. You can set the number of spins (up to 1000), stop when the jackpot is won, stop if a win exceeds or equals (up to $99,999), stop on any win, stop if your balance increases by (up to $99,999), stop if your balance decreases by (up to $99,999) and stop once the feature is triggered. Autoplay can be stopped at any time by using the “Stop Auto” button. Skill stop is available during free spins. You can speed up autoplay by turning on “Turbo Play,” which is found under “Options.”

All symbols on the T-Rex video slot pay left to right only, except for scattered eggs (which pay any). Winning combinations on different paylines are added. Scatter wins are added to payline wins. Scatter wins are multiplied by the total bet. Payline wins are multiplied by the bet per line. Only the highest win per payline is paid out. For quick reference, here is the paytable for the T-Rex video slot: 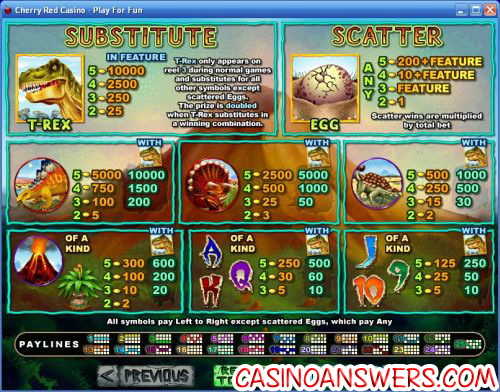 The T-Rex video slot has a great theme, some cool animations and sound effects, a hefty progressive jackpot and a good top fixed jackpot as well. When all of these factors come together, it makes T-Rex a very good video slot. The only thing you can say it lacks is a bonus game. Get a $7,777 signup bonus to get free bonus cash to play T-Rex and many other great slot machines with at Cherry Red Casino!

Are US players able to play the T-Rex video slot game for real money?

Players located in the United States are free to sign up, deposit and play T-Rex for real money at US-friendly RTG online casinos such as Cherry Red Casino and Winpalace Casino.

How do I win the T-Rex video slot machine’s progressive jackpot?

The T-Rex Progressive Jackpot can be triggered randomly on any spin you make. There is no winning combination that will trigger it. For better odds of winning the progressive jackpot, increase your bet per line on the T-Rex video slot.

Can I play the T-Rex slot machine for free?

Yes, you can play the T-Rex video slot for free in practice mode at Cherry Red Casino and Winpalace Casino. This is ideal for players who still haven’t decided whether or not to make a deposit, but want to try the T-Rex game out for themselves first.