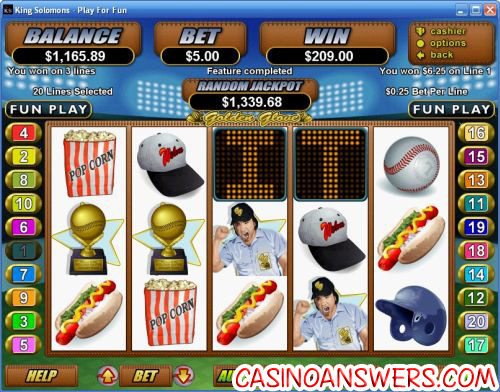 If you get 3 Glove symbols from left to right on the reels of the Golden Glove video slot, you will win 9 free games with a 2X multiplier in the Home Run Feature. During the free spins feature, the letters H-I-T can appear on the second, third and fourth reels. If you spell out the word “HIT” successfully, you will be awarded a single, double, triple or a Home Run. For each run you score, a prize of twice the triggering bet is awarded and you will receive one game of the Grand Slam feature. All prizes other than the run bonus are doubled in these free games. You can hit a grand slam using this feature when you play Golden Glove at Cherry Red Casino!

All symbols in Golden Glove pay left to right except for the Scattered Glove, which pays left to right and/or right to left. Wins on different paylines are added together. Scatter wins are added to payline wins. Scatter wins are multiplied by the total bet. Payline wins are multiplied by the bet per line. Only the highest win on each payline is paid out. Maximum win per paid spin is 50,000X bet per line. 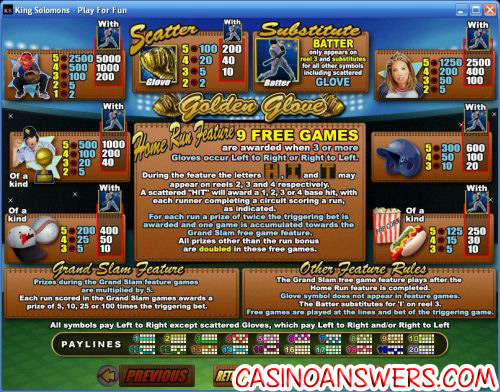 Golden Glove has some more interesting in-game features for players who are looking to customize their gameplay a little more. In the middle of any spin, you can hit the “Stop” button to use skill stop to halt the reels. If the game is playing too slow for you, you can find the Turbo Play mode in the autoplay options.

Golden Glove takes America’s Pastime and brings it to video slot form very successfully. The only other thing we would’ve liked to see is a Home Run Derby bonus game or something to that affect, but it would most likely end up replacing the Home Run and Grand Slam features, which we did enjoy instead. Get a signup bonus of up to $7,777 free when you sign up and make a deposit at Cherry Red Casino!

How do I win the Golden Glove Progressive Jackpot?

Alternative Ways to Ask/Incoming Search Traffic:
The answer to the question Golden Glove Video Slot (RTG) is also applicable for the following questions: