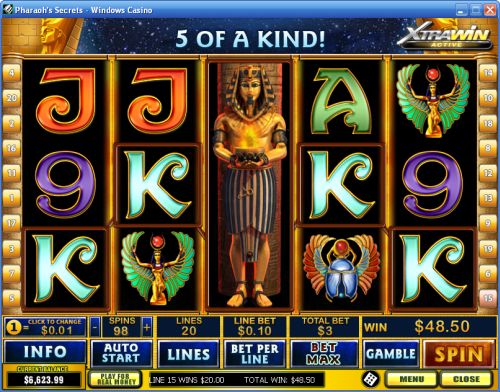 Coin values on the Pharaoh’s Secrets slot machine are $0.01, $0.05, $0.10, $0.25, $0.50, $1 and $2. You can select from 1-20 paylines and 1-10 coins per line on a spin. You also have the option of activating the Xtra Win feature (which will be covered later in this review) when you play all 20 lines, which will increase your total bet by 50%. The minimum bet that you can make on the Pharaoh’s Secrets slot game is a penny per spin up to the maximum total bet of $600 per spin. Pharaoh’s Secrets has a huge betting range and is suitable for any online casino player – casual player, high roller or anywhere in the middle. You can manually skill stop the reels on Pharaoh’s Secrets at any time by pressing the “Stop” button in the middle of any spin you make. To play the Pharaoh’s Secrets online slot game, select your bet and press the “Spin” button. To play all 20 lines at 10 coins per line, you can also use the “Bet Max” button to spin the reels.

The Pharaoh symbol is wild and substitutes for all symbols except for the Scattered Pyramid symbol. The Pharaoh symbol does not pay out by itself. It only appears on reels 2, 3 and 4. During the free spins feature, the wild symbol will become an expanding wild and will double your winnings.

On the Pharaoh’s Secrets video slot, you can activate the Xtra Win feature, which will turn the Pharaoh wild symbol into an expanding wild symbol in the regular slot game. Activating this feature will increase your total bet by 50%. Scatter wins will be based on the new total bet, whereas payline wins will remain the same without the feature activated. The Pharaoh symbol will be an expanding wild during the free spins feature regardless of whether or not the feature is activated. You can use this feature to increase your winnings dramatically when you play at Bovada! 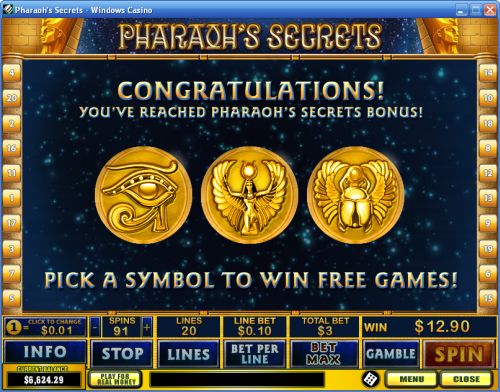 No, American players are currently unable to play the Pharaoh’s Secrets slot machine for real money. For a list of many other Egyptian video slots (some of which are USA-friendly), please read our list of Egyptian slots.