Thunderstruck II, obviously, is the sequel to the popular Thunderstruck video slot from Microgaming. Like its predecessor, it has a Norse God theme, featuring Thor, Odin, Loki and Valkyrie. When you start Thunderstruck II, you are shown a very well done intro movie where Thor uses his hammer to bust up a rocky cliff to create the Thunderstruck II logo. 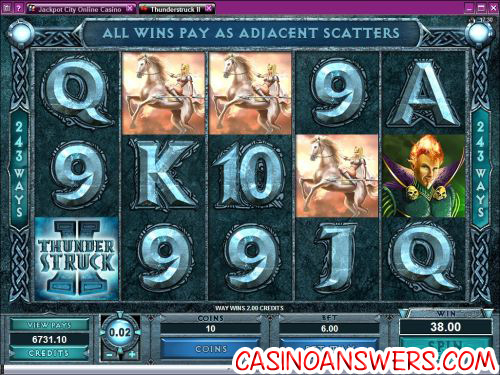 The Valkyrie feature will be enabled on the first trigger of the free spins bonus feature. You will receive 10 free spins with a 5X multiplier. Free spins can be re-triggered.

The Loki feature will become available on the fifth trigger of the free spins bonus feature. You will win 15 free spins with the Wild Magic feature. The Wild Magic symbol will appear on the third reel and will randomly transform symbols into additional substitutes. 2 or more Bonus Hammer symbols will trigger up to 4 additional free spins.

The Odin feature will be available on the tenth trigger of the free spins bonus feature. You will win 20 free spins with the Wild Raven feature. Odin’s Ravens can randomly turn symbols into 2X or 3X multipliers. You can win a 6X multiplier if both Ravens land on the reels.

Here is a screenshot of Thunderstruck II’s Loki free spins feature (the second of the four features): 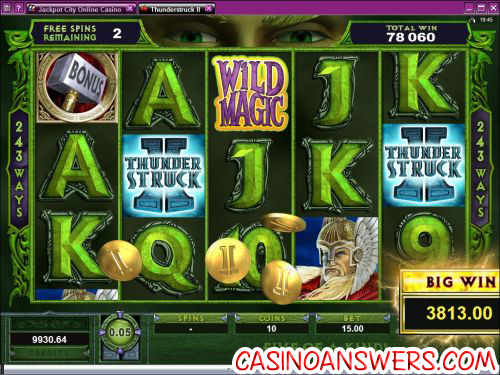 As you can see, whenever you receive a big win on Thunderstruck II, a box will pop-up displaying your total win and gold coins start to scatter on the screen. Here’s hoping you get to see this for yourself!

Change the Thunderstruck II video slot from Regular mode to Expert mode and you can use its autoplay feature. You can set the number of spins (from 5 to 500) and to stop if a win exceeds or equals an amount (from $100 to $9999). You can also use quick play 5X and 10X autoplay buttons if you don’t wish to add any stop conditions. You can always cancel the autoplay feature at any time.

Thunderstruck II is a vast improvement over the original Thunderstruck video slot, which is to be expected as the first game is quite a number of years old by now. It has excellent graphics, music, sound and animations in addition to its very unique and original gameplay and many different special features. It’s definitely a video slot we recommend you try, because there’s not really anything else like it.

If you want to play the Thunderstruck II video slot for real money, we suggest you take advantage of the 100% up to $200 signup bonus offered at All Jackpots Casino!

Are players from the United States able to play the Thunderstruck 2 slot?

No, online casinos powered by Microgaming are not accepting players at this time. For some very innovative and interactive video slots that are US-friendly, try playing the iSlots at This is Vegas Casino.

Can I play the Thunderstruck 2 video slot on my mobile phone?

While you can’t play the Thunderstruck II slot on your cell phone at the moment, you can play the prequel on your mobile device. For full details and a 150% signup bonus, see Jackpot City Mobile Casino.

Does Thunderstruck 2 have a progressive jackpot?

Where can I play the Thunderstruck video slot machine?