Dubya Money is a 3-reel, 1-line AWP fruit machine developed by Microgaming, featuring a hold feature, nudge features, a bonus game and many more special features. You can play the Dubya Money fruit machine at Bovada.

Dubya Money is a fruit machine with a George W. Bush theme. With a Texas accent, “W” sounds like “dubya,” but the “dubya” has a double meaning in that it can also be slang for “double your.” Symbols on the Dubya Money fruit machine include the Dubya, Oil Drum, Stetson Hat, Watermelon, Cracked Bell, Plum, Orange, Lemon and Cherry symbols. For a look at the Dubya Money Microgaming fruit machine, a screenshot has been provided below: 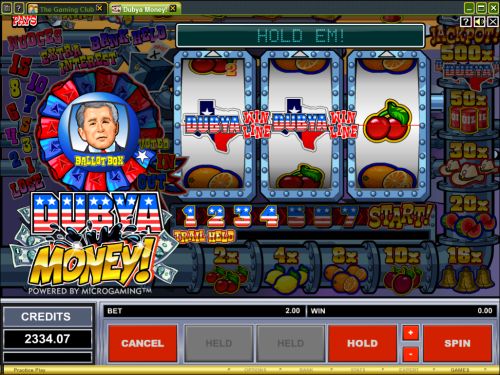 The top-paying symbol on the Dubya Money fruit machine is the Dubya symbol. If you land 3 Dubya symbols on the center payline, you will win the 500 coin top jackpot.

The bonus trail is found below the reels. It is an important part of the Dubya Money fruit machine and can lead to triggering the Oil Fields bonus game. When a symbol with a number on it lands on the center payline, you will move up that many positions up on the bonus trail. Once you get to “Start!”, you will trigger the Oil Fields bonus game. The trail is reset after each spin you make unless “Trail Held” is (randomly) lit up.

When a symbol with a “Bonus” label appears on the reels, you will get to play a reel bonus game. These bonus games are all very simple, all with the goal of triggering the Oil Fields bonus game or moving you up the trail. The various features will flash in the window and you will hit “Stop” to land on one of them. The Boost feature will randomly boost you forward on the cash trail. The Skillstop will flash the trail numbers in sequence and it’s up to you to time you stop properly. Stoppa is similar to Skillshot but with a more random pattern. Selector will have groups of numbers flash randomly. Use these reel bonus games to trigger the Oil Fields bonus game at Bovada!

If you trigger the Oil Fields bonus game through one of the many methods available on the Dubya Money fruit machine, you will be taken to a new screen. There are 5 different features within the bonus game. Hit the “Stop” button to select one. One of the features is Win Again, which is addressed later on in this slot review. Another is Nudge Mania where you can win up to 15 nudges by gambling your nudges. Spin-A-Win is a regular slot game feature that spins a random win on the reels. If you activate the Oil Strike feature, you will be returned to the regular slot game. Various multiplier values flash randomly on the bonus trail. Click one of the “Hold” buttons to select a reel. A random prize value is assigned to that reel. The reels will spin. If an Oil Barrel symbol stops on the payline of the reel you selected, you win that prize. Lastly, the main feature is the Dubya Money feature. It is played on the three sets of bonus reels. When triggered, these reels will start to spin. Each winning combination will be added to your total prize. The reels will continue spinning until you receive a losing spin. For a look at the Oil Fields bonus game, a screenshot has been provided below: 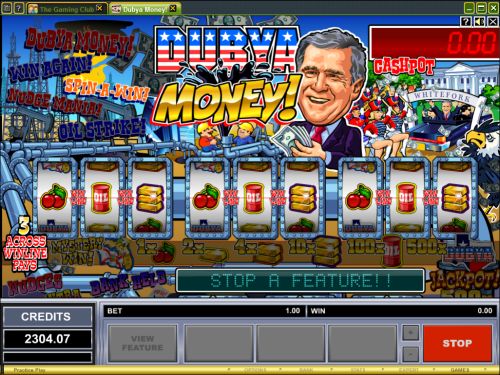 Another common fruit machine special feature is the nudge feature. This is another random feature on the Dubya Money online slot. It enables the player to bump a reel to display the next symbol above on the center payline. You can be awarded up to 4 nudges per spin. You can also bank (save), gamble or earn extra “interest” on your nudges, which are also all randomly triggered features. You can choose to not play your nudges by simply continuing to play the slot game.

At any time during the Dubya Money slot game, you can randomly activate the Shifta feature. This special feature will hold one of the reels and spin the reels in to an automatic winning combination. A similar feature is the random Win Again feature. The various symbol names flash in the window above the reels. Click the “Stop” button to choose one of the various symbols symbol. The game will automatically spin in the winning symbol combination.

Dubya Money is armed to the teeth with special features for the fruit machine player to enjoy. Its theme is very humourous – not quite a parody, but more of a satirical look at the former President of the United States George W. Bush. You can double your money with the Dubya Money fruit machine by playing it at Bovada!

Are players from the USA allowed to play the Dubya Money slot machine for real money?

Unfortunately, players who George W. Bush once represented cannot play the Dubya Money slot game for real money. We recommend you check out a Rival casino such as Bovada and play the brilliant iSlots!

Can I play a free flash game of the Dubya Money AWP slot game?

Yes, the Dubya Money flash game is available to play at Microgaming flash casinos including Bovada. You can play for free or you can play for real money. If you have an issues with the flash casino, we recommend you download the latest version of Adobe Flash Player for optimal performance.

Alternative Ways To Ask/Incoming Search Traffic:
The answer to the question Dubya Money Fruit Machine Review is also applicable for the following questions: