The Wolverine video slot is a 5-reel, 25-line Marvel Jackpot slot machine. It has a bonus game and progressive jackpots. It’s playable at Cryptologic casinos such as VIP Casino.

If you’re a fan of the X-Men, you’re probably a fan of the team’s most popular character, Wolverine. This video slot is based on the comics, rather than the 2009 feature film X-Men Origins: Wolverine. Any big Wolverine fan knows that Wolverine made his first appearance in Incredible Hulk #181 and joined the X-Men in Giant X-Men #1. He has been one of the most popular characters in the Marvel Universe ever since.

The Wolverine video slot is part of the Marvel Jackpot series at Cryptologic casinos. Its graphics and sounds aren’t quite as good as the more recent additions to the series, but they’re still very good. The symbols include Logan smoking a cigar, Jean Grey, Sabretooth, Wolverine’s claws and suit, claw marks and various knickknacks such as a compass, army bag, dogtag, etc. The substitute symbol is Wolverine (in costume) and the scatter symbol is Sabretooth. Here’s what the Wolverine slot looks like: 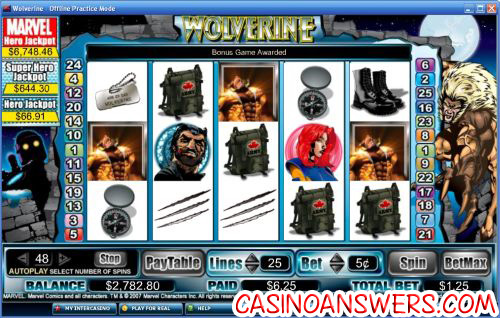 The Wolverine slot features three Progressive Jackpots. There’s a Hero Jackpot ($100s), the Super Hero Jackpot ($1000s) and the Marvel Hero Jackpot ($10,000s). Each of these Marvel Jackpots is awarded randomly. You don’t even need to match any symbols to qualify. However, the size of the wager you make on a spin will determine the chance of winning a jackpot. That means the more you bet, the higher your chances of winning big are!

If three or more Sabretooth scatter symbols appear in a single spin, you will trigger the Wolverine vs. Sabretooth bonus game feature. The bonus game is situated in a battle between Wolverine and his archenemy, Sabretooth. You will be given between 1-5 attacks. You must choose an attack style (Slash, Kick or Ballistic) for Wolverine. You will win prizes if your attack works. If you manage to beat Sabretooth, you will win even more prizes! As you can see, Wolverine’s the best at what he does, but what he does best isn’t very nice: 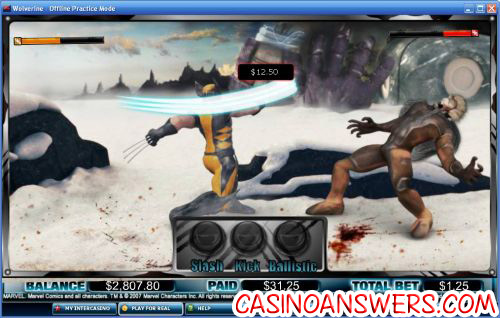 Does the Wolverine slot machine have any progressive jackpots?

You got it, bub. The Wolverine video slot is linked with the same three progressive jackpots as every other Marvel Jackpot Slot at VIP Casino – Hero, Super Hero and Marvel Hero.

I’m an online casino played based in the United States. Can I play the Wolverine slot machine game?

Unfortunately, American players are not able to play the Wolverine video slot for real money due to the UIGEA. Instead, we suggest that you head over to Vegas Days Casino and play some of their iSlots which are just as fun!

Alternative Ways to Ask/Incoming Search Traffic:
The answer to the question W is also applicable for the following questions: