The Hulk is a 5-reel, 9-payline video slot from Cryptologic. It is based on the Marvel Comics series The Incredible Hulk, one of the most popular and well-known comic book characters around. The Hulk slot has a bonus game, scatter wins and three progressive jackpots. Hulk can be found at Cryptologic casinos including InterCasino and Casino Joy.

Unlike many Marvel Jackpot Slots, Hulk uses a lot of 3D-type graphics for its symbols rather than 2D comic book style symbols. It’s a slot machine based on the Incredible Hulk, so you can only expect that there will be a lot of green involved in the look of the slot. Here’s a peek at Cryptologic’s Hulk slot machine: 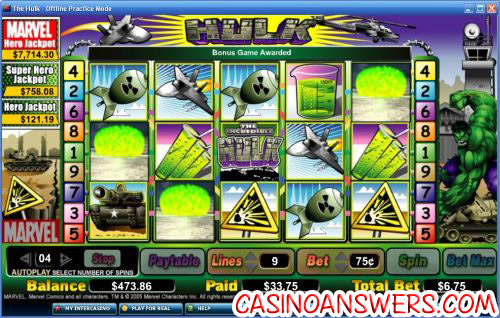 The Hulk’s highest payout is a sweet 10,000X if you hit 5 wild substitute logos. The substitute symbol is the Incredible Hulk logo, unlike most Marvel Jackpot Slots, where the substitute will be the main character’s face. The scatter symbol, which is most commonly the logo, is a radiation logo. The animation when you get a scatter win with radiation logos is a giant explosion and looks great. Scatter wins are multiplied by your total wager, are paid separately of the lines selected and are added to your payline wins.

If you manage to have three of these radiation scatter logos appear, you will activate the Hulk Smash bonus game. In the game, The Hulk must located and destroy a secret weapons lab. First, you have a choice of whether to smash a tank or helicopter and a prize will be awarded accordingly. After that, you’ll have a second stage with the tank and helicopter. Finally, you will enter the labratory and if Hulk destroys it, you will win more prizes. Hulk has a life meter and if he takes too much damage during these tasks, the game will end. The Hulk Smash bonus game has some great graphics and even better, chances to win big: 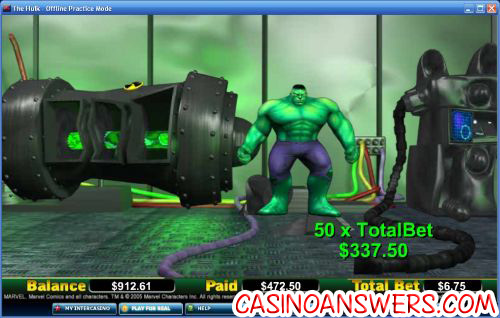 The Hulk video slot is another great Marvel Jackpot Slot brought to you by Cryptologic. To get the best bonus to play Hulk, you can find a 100% up to $225 signup bonus over at InterCasino. In addition to that signup bonus, InterCasino is always running special promotions, including monthly reload bonuses for existing players.

I’m in the United States and looking for an online casino where I can play the Hulk slot. Can I find one?

No, none of the Cryptologic casinos are accepting players from the US at this time. Have a look at some RTG casinos such as Bovada.

How many Incredible Hulk slot machines are there?

Out of all of the comic book characters who have received slot machine treatment, Hulk has the distinction of having the most – three. There are two at Cryptologic – this one and the Hulk Ultimate Revenge slot. There’s also a Playtech Hulk video slot based on the most recent film.

Which Hulk video slot should I play?

Quite simply, play them all! Each of the games is a lot of fun, they each have great bonus games and they all offer you the chance to win a lot of cash. This goes double for you if you’re a big Hulk fanatic.

Where can I play the Hulk slot machine? What marvel comic slots are there? Is there an Incredible Hulk video slot?