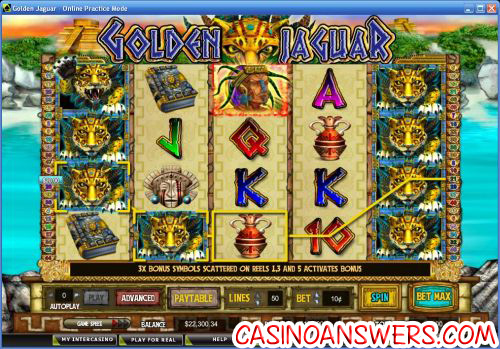 When you hit three scattered bonus symbols anywhere on the reels of the Golden Jaguar online slot machine, you will trigger the free spins feature. You will win 7 free spins and up to an 8X multiplier. Other available multipliers are 2X, 3X, 4X or 5X. The free spins feature can be re-triggered up to 13 times. The scatter symbol only appears on reels 1, 3 and 5.

Payouts are displayed on the Paytable. Payline wins are multiplied by the bet per line. Highest win amount is paid on each selected payline. Feature wins are added to scatter and payline wins. Win combinations pay from left to right. For the entire payout schedule, below is a screenshot of the Golden Jaguar paytable, courtesy of InterCasino: 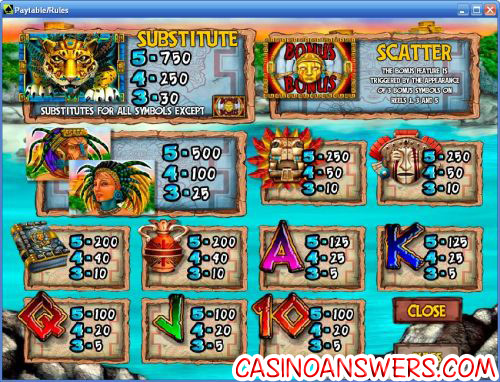 Golden Jaguar is a good 50-line video slot, but it could use a few more special features. Besides that, the graphics, sounds and animations are all excellent. The stacked wilds come up very frequently and end up leading to most of the wins you’ll receive in the game. To play the Golden Jaguar video slot, sign up and make your deposit today at InterCasino!

Are players from the United States of America able to play the Golden Jaguar casino slot?

Can I play a free Flash game of the Golden Jaguar video slot?

Unfortunately, the Instant Play casinos at InterCasino and Casino Joy only offer real money play rather than free practice play. However, if you are looking to play the Instant Play version of the Golden Jaguar slot game, you’ll be able to find it there. If you experience issues with the Flash casino software, try downloading the latest version of Adobe Flash Player.

Where can I play the Golden Jaguar slot flash game?