There are tons of Marvel Comics slots out there – X-Men, Spider-Man, Incredible Hulk, Fantastic Four… even Daredevil! We know that some DC Comics fans need some love of their own and evidently so does InterCasino. That’s why InterCasino has added DC Comics video slots such as Batman, Superman and Wonder Woman.

US visitors – bad news. The casinos that host the Batman Slot don’t currently accept US citizens to play. However we would highly recommend the interactive story slot machines available at the likes of Rockbet Casino.

For the rest of you, InterCasino is your source for the Batman slot. Click here before the Joker gets ya!

Batman is one of the most popular comic book characters ever created. The Dark Knight very much transcends the comic genre and has been featured in several different films, being portrayed by such actors as Michael Keaton, Val Kilmer, George Clooney (not that we wouldn’t like to forget that one) and most recently Christian Bale. He’s also had numerous TV series (most famously, the ’60’s one starring Adam West) and countless animated series. The character’s appeal is due to the fact that unlike other superheroes such as Superman, Batman (or Bruce Wayne) doesn’t have any superpowers. He is just a human with extreme dedication.

Batman has an advanced autoplay feature, which is always good if your index finger gets tired of clicking. You can set the amount of spins (up to an incredible 999!), stop conditions including win threshold and cumulative win or loss. You can also change the speed from the regular speed to fast or very fast. This is great if you don’t have any patience or you just want to play a lot of spins. We found the normal speed just fine, as we like to celebrate our wins at least for a second. Here’s what the Batman video slot from InterCasino looks like: 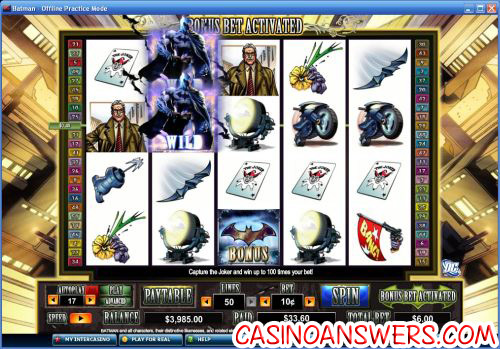 The Batman video slot introduces the new Bonus Bet feature. The Bonus Bet button activated Max Lines and makes the total bet 60 credits instead of 50, unlocking an extra bonus feature. You can activate the Bonus Bet by clicking on the button and pressing “Spin” to play.

Batman has a Re-Spins feature. Your winnings are doubled during this feature. This is awarded when Commissioner Gordon appears on Reel 1 or 5 and the Batsignal appears on the other reel. After paying winning combinations, Reel 2, 3 or 4 will expand. The expanded reel is held and all other reels will re-spin three times. Your winnings from the feature will be added to your payline and scatter wins. When you activate the Re-Spins feature, an animated figure of Batman will appear and throw a Batarang at you, like so: 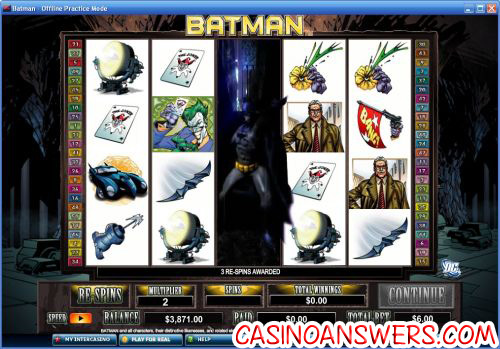 There is also the Descent into Madness bonus game. This is triggered when the Bonus Bet is activated and 3 or more Scatter logos appear left to right. Batman must target inmates with his Batarang to win prizes. Once they are defeated, you must attempt to trap the Joker. If you succeed, you will win 100X your bet. If he is not trapped, you have a second chance.

The Batman video slot has got excellent graphics straight out of the comics and smooth animations that will get any Batman fan excited to start spinning away. If you think you might like this slot, we suggest you pay a visit to InterCasino!

Where can I play the Batman slot machine?

You’ll find the Batman video slot at a number of different Cryptologic online casinos. We recommend you play it at InterCasino, which offers a 100% up to $225 signup bonus for slots. InterCasino also has a My Cash Rewards promotion where you can get a generous Super Slots Bonus every single month! To play the Batman video slot, you can sign up and make a deposit today at !