Vegas Jackpot Keno has a fairly basic design. A nice and simple one which makes it easy to use.

The background is red with “WIN” cascaded in the background. The paytable is listed at the left with the results on the right of the game numbers. (Get 20 free spins on the Mariachi 5 slot, win real cash. Click here and use code DANSPINS20 during signup.)

Below is a screenshot of Vegas Jackpot Keno from Rival: 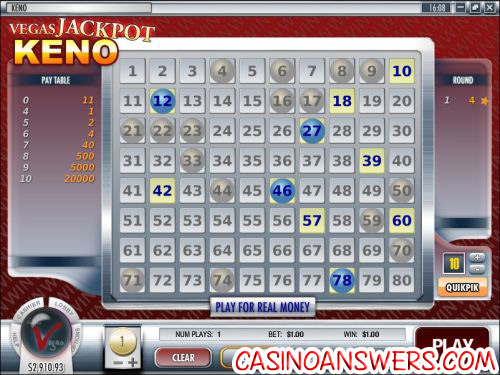 Vegas Jackpot Keno offers higher payouts when compared to the regular Rival Keno game. It’s also interesting because you can get a good payout for hitting no numbers, proving that having no luck can be better than having a small amount of good luck. The negative to that is that you will not get any payouts for 1-3 numbers.

Can I play a free Flash game of Vegas Jackpot Keno?

Keno – Vegas Jackpot is casino game made by Rival Gaming, a subsidiary of a Cyprus-based parent company called Black Chip Limited. A snapshot of Keno – Vegas Jackpot appears like a lottery ticket, and players are reminded of the bingo game. Traditional Keno, Extra Draw Keno, and Keno Exacta are examples of other keno variants. The term “keno”, which has been Americanized, is a corruption of the French and Latin terms “quine” and “quini”, which mean things pertaining to five.

Keno – Vegas Jackpot would not have been the game it has grown to become were it not for Cheung Leung. Leung, a leader in the Han Dynasty, sought to create a game that would assist him to get the much-needed funds for expensive military campaigns. Luckily for US casino operators, they familiarized themselves with keno courtesy of immigrating Chinese citizens. Like in the majority of keno variants, Keno – Vegas Jackpot has 80 numbers, which is a considerable reduction seeing that Leung’s invention supported 120 suchlike symbols. Players choose numbers then click the “Play” icon; the pay table depends with the hits.

An outstanding thing about Keno – Vegas Jackpot is its “Quikpik” icon, which enables players to let it automatically choose numbers for them. The only requirement is selecting—by using the “+” and “-” icons—the amount of numbers desired for a specific round or rounds. This feature, coupled with the “Play 10” icon, imply that playing the game can be virtually automated, or, better yet, players can play using a hands-free mode for long.

Variables such as luck are essential in winning Keno – Vegas Jackpot rounds. Numbers 1 to 80 have an eightieth probability of being chosen, which means that strategies might not matter; but a player who chooses the maximum ten numbers in a given round has an added advantage over a counterpart who chooses only one number. Like the rest of keno games, the RTP of Keno – Vegas Jackpot can be anywhere between 65% and 80%, while the house edge ranges between 20% and 35%.

Alternative Ways To Ask/Incoming Search Traffic:
The answer to the question Vegas Jackpot Keno Guide & Review is also applicable for the
following questions: