Klub Keno is a fun game that can be played in various online casinos or brick-and-mortar casinos. One drawback of the game is that it is too basic and has very few features, but the likelihood of winning a big amount of money makes up for that. Klub Keno uses only forty numbers, and players are expected to pick between three numbers and 10. You win double the payout if the StarBall lands on any of your numbers on the board.

The game allows you to wager as little as $0.02 or as high as $1.00, and that may not augur well with people who like to bet with huge amounts. But for the rest, they’ll find an amount they’ll be comfortable to wager.(Get 20 free spins on the Mariachi 5 slot, win real cash. Click here and use code DANSPINS20 during signup.)

But how do you play Klub Keno?

If you intend to play the Klub Keno game for real money, select a bet size and then tick up to a maximum of ten numbers you wish to play. You’ll then choose to play either of the following rounds: one, five or ten. In case the numbers drawn match with your selected numbers, they’ll be marked with a star. It is noteworthy that wins are rewarded according to the bet size as well as how many matching numbers you get. For Klub Keno, getting a StarBall entitles you to double your payout.

Klub Keno is available for playing at a variety of online casinos, and you can play either for fun or for real money. In case you intend to win real money, then you’ll need to sign up with a reputable or respectable online casino offering the game and make a deposit. After that, you’ll then head over to the game and choose your bet size.

You win depending on the numbers you match. If you match more numbers, you win more. If you bet a lot, you also win a lot. You can bet with at least a penny for each game, and you can wager up to $1 on each game. The maximum payout you can ever expect when you play $1 and match all the ten balls is $15,000.

With Klub Keno, you may opt to play a game at a time, or play ten games simultaneously using a single bet and numbers picked without the need to stop and pick numbers again. After the games are over, you may click on ‘New Game’ to commence a new card and start anew.

You might be wondering why this hitherto little-known game is growing in popularity at such a rate. Its main claim to popularity is the frequency of the wins. Because a lot more numbers are produced by the random number generator in Klub Keno than in a standard lottery, players invariably have the chance to get smaller wins more frequently. And, thanks to that, the game has become popular among all ages and across the globe. In many countries, the game is run by national or private lottery organizations which have made the fun game available outside the precincts of licensed casinos. Klub Keno’s fewer features turn out to be an incentive rather than a disincentive because it appeals to newbies who might feel intimidated by all the shiny things that other Keno games offer.

Another reason why the game is so popular to wagers of all ages is that Klub Keno features a StarBall that grants players the chance to win huge money – twice the normal payout.

It is definitely a game worth trying.

Klub Keno is an online casino game which runs on gaming software provided by various developers, including Betsoft Gaming and Gamesys. Klub Keno, which is themed like a lottery ticket, is related to other Keno variants such as Instant Keno, Supa Keno, and Krazy Keno. Incidentally, the word Keno’, which is an Americanized noun that was first used circa 1800s, is a derivative of: one, the French term quine’ which denotes five, particularly winning combinations; and, two, Latin terms quini’ and quinque’ that might refer to fivefold.

A one-time Chinese ruler named Cheung Leung, whose rule is synonymous with the Han Dynasty, is regarded as the inventor of Keno. Faced with financial constraints amid looming simultaneous invasions, Leung’s objective was fundraising for his military activities; Keno was reportedly instrumental in financing for the renowned Great Wall. Chinese citizens, who relocated to America in the 1860s during the building of the Overland Route, a railway infrastructure, exported Keno. The ancient Keno version had 120 images but most current Keno variants have 80 balls, whereas others, such as Klub Keno, have 40 balls.

Klub Keno’s balls are written numbers one to forty, from which a player selects between three and ten ball numbers. Then the mixer on the left side selects ten ball numbers at random. The payout is based on the ‘hits’—these are the ten randomly selected ball numbers juxtaposed with those selected by the player.

Klub Keno has an awesome feature called ‘Star ball’. By the way, the ‘Star ball’ is a single ball number that is randomly selected from the forty balls, and a player earns twice (2X) the ordinary payout if any of their selected ball number is similar to this unique ball. An advantage of Klub Keno is that a player can somewhat automate the playing process. For instance, a player can simply press the “Play One” or “Play Five” or “Play Ten” buttons so as to play the respective Klub Keno game rounds repeatedly using pre-chosen numbers, rather than pressing “New Game” progressively.

The graphics of Klub Keno is appealing; the warm colors are a pointer to the developer’s familiarity with color psychology. The font size used in the numbering of Klub Keno balls makes them noticeable. 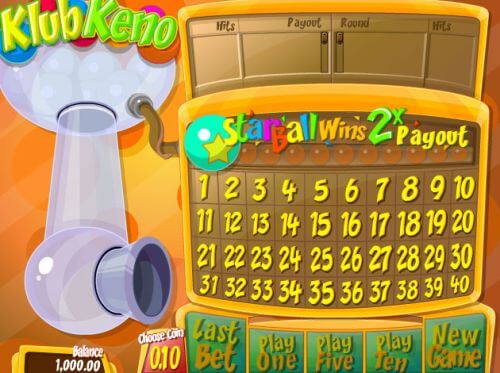 Unfortunately, it is hard to distinguish between the ‘Star ball’ and the other balls at times because there might not be the distinctive star. Klub Keno has bad odds because it is a luck-oriented game. Lastly, there is something childish about the layout of Klub Keno as if the target market was children.

Alternative Ways to Ask/Incoming Search Traffic:
The answer to the question Klub Keno is also applicable for the following questions:

﻿In 1984, Trump Plaza opened in Atlantic City. In 2011, Casino Software Provider Vegas Technology closed their doors to all new players.