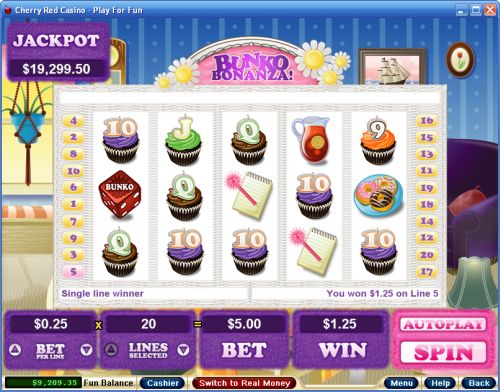 The top payouts on the Bunko Bonanza online slot game are the Doughnuts and Sangria symbols. If you hit 5 of either symbol on a selected payline, you will win the 1000 coin top jackpot or 2000 coins with a Bell wild symbol. The Bell symbol substitutes for all symbols except for the Scattered Bunko Dice symbol. The prizes are doubled when one or more Bell symbols substitutes appear in a winning combination. Win big on the Bunko Bonanza slot game by hitting these jackpots at Bovada!

The Bunko Bonanza video slot features a progressive jackpot, which at the moment is at $19,300. The Progressive Jackpot can be won on any spin you make in Bunko Bonanza. The jackpot is triggered randomly and is added to all other wins.

Wins on different lines are combined. Scatter wins are added to line wins. Line wins are multiplied by the bet per line. Only the highest win is paid per line. Maximum win per paid spin is 50,000 times bet per line.

Hit the “Autoplay” button to open the autoplay settings. You will be able to set the number of spins, set it to stop when the jackpot is won, stop if a win exceeds or equals (any amount you input), stop on any win, stop if your balance increases/decreases by any amount you input and stop once the feature is triggered. You can stop the Bunko Bonanza autoplay mode using the “Stop Auto” button to deactivate it.

If you’re a Bunco player, you will most definitely enjoy the Bunko Bonanza video slot! If not, maybe you will enjoy the video slot enough that you will want to try the dice game out for yourself. You can play Bunko Bonanza for real money when you sign up and make a deposit at Bovada!

Can players from the USA play the Bunko Bonanza online slot for real money?

Yes, players from the United States of America can play Bunko Bonanza for real money. You can play it when you sign up at Bovada!

How do I win the Bunko Bonanza progressive jackpot?

The Bunko Bonanza jackpot is won at random. You don’t need to even get a winning combination to win the jackpot! To increase your chances of winning the progressive jackpot, try raising your bet per line.