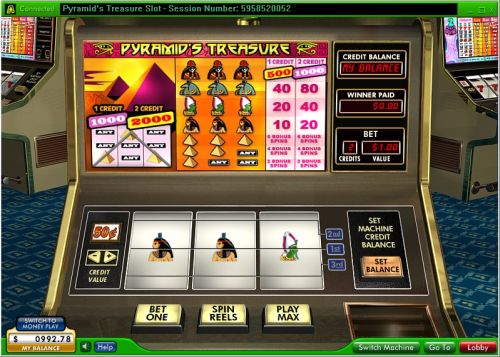 Pyramid’s Treasure does have a few interesting twists to it. The first is that is pays out in free spins rather than cash winnings. This is more similar to most slots than you’d think because the majority of smaller wins end up going towards the next spin anyway. The second is the fact that the top paying winning combination must be in a triangular pyramid shape rather than a straight or diagonal payline. These twists make Pyramid’s Treasure into an intriguing slot machine to play. You can try it out for yourself by signing up and depositing at Bovada!

How do I win the top jackpot on the Pyramid’s Treasure slot machine?

Here’s how you can win the 2000 coin top jackpot on the Pyramid’s Treasure online slot machine. First, select your coin value (or bet) to the left of the reels. After that, hit the “Play Max” button. The Pyramid symbol must now land in the following positions: Line 3 on Reel 1; Line 2 on Reel 2; Line 3 on Reel 3.

Where can I find more Egyptian slot reviews?