Ultimate Keno, whose appearance is modeled on a virtual scratch-it lottery ticket, is an Internet casino game developed by Realistic Games, a Berkshire-based games developer. Ultimate Keno is listed as an arcade game.

There are many other Keno-branded online casino games, including the 40-ball Klub Keno, the the 80-ball Instant Keno, the 80-ball Extra Keno, and the 80-ball Traditional Keno.

Although “Keno” is a noun that has been synonymous with American English since circa 1800, it is actually a corruption of a foreign word; “Keno” was originally either the French word “quine”—it means five, esp. winning combinations—or Latin word “quini”—it is a prefix like in the word quintet.(Get 20 free spins on the Mariachi 5 slot, win real cash. Click here and use code DANSPINS20 during signup.)

Cheung Leung, a Chinese ruler during the war-plagued Han Empire, came up with an ancient version of keno so as to fund costly strategic defense operations without inconveniencing his people with more taxes.

The Great Wall was reportedly funded by income from keno. Keno found its way to the West—thanks to U.S.-bound Chinese immigrants who were eying the railroad jobs.

Although Leung’s variant boasted of 120 suchlike characters, most present-day keno versions have relatively lesser balls, especially either 40 balls or 80 balls. Contextually, Ultimate Keno has number one to number eighty, wherein the bettor selects at least one number and up to fifteen numbers.

Not sure if Cheung would consider this the ULTIMATE keno game or not but it is a pretty fun one.

To play Ultimate Keno, the system might first prompt you to either turn off or turn on the sound. Secondly, the player chooses the preferred numbers in the virtual keno board by clicking on the numbers (to deselect, you press twice on the wrongly chosen number or click on the “clear” button at the bottom left corner). Alternatively, there is a version of Ultimate Keno that allows the bettor to let the system choose the numbers for him or her by pressing an “Autopick” button. After selecting the numbers, the player then presses the “Play” icon. In some versions, there is a pipe-shaped mixer at the right side that draws the selected balls at random.

Here is a screenshot of Ultimate Keno in action: 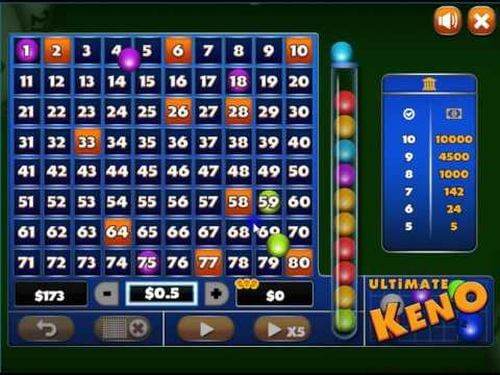 Naturally, keno games such as Ultimate Keno are games of chance; strategies might be fruitless because the eighty ball numbers have an eightieth possibility of matching up with those drawn. The return to player rate of Ultimate Keno is between 65 per cent and 80 per cent. Ordinarily, the house edge of most Keno variants, including Ultimate Keno, is 20 per cent to 35 per cent.

Alternative Ways to Ask/Incoming Search Traffic:
The answer to the question Ultimate Keno is also applicable for the following questions:

Did Ultimate Bet have a version of Keno? What is the ultimate keno game online?