Japan-O-Rama is a 5-reel, 20-line iSlot-branded video slot developed by Rival, featuring expanding wilds, multipliers and a bonus game. You can play the Japan-O-Rama iSlot at Bovada.

The Japan-O-Rama interactive video slot is a look at all things Japanese. The Japanese culture has produced many interesting and fascinating characters, technologies, food and more. Japan-O-Rama pretty much covers all of it. Symbols on the Japan-O-Rama video slot include Godzilla (expanding wild), Sumo Wrestler (bonus symbol), Geisha (scatter symbol), Samurai Sword, Ninja, Robot, Anime Girl, Bullet Train, Video Game Controller, Hello Kitty, Cell Phone and Sushi. For a look at Rival’s Japan-O-Rama interactive slot, a screenshot has been provided below: 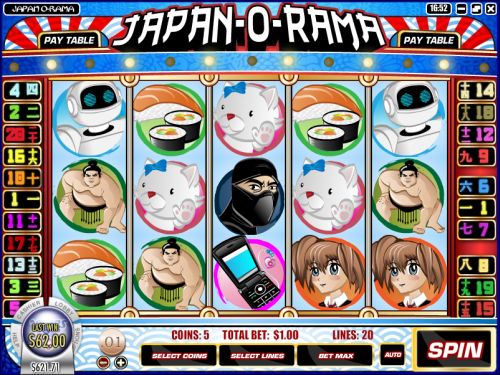 Whenever the Godzilla symbol lands on a reel, it will expand to become an expanding wild and form new wins (excluding scatter wins). The Godzilla wild symbol only appears on the first three reels.

When 3, 4 or 5 Geisha symbols appear on the reels of Japan-O-Rama, you will win 5, 10 or 20 free spins at a 3X multiplier. All wins are tripled during the free spins feature. Using this feature, you can win lots of free cash when you play the Japan-O-Rama iSlot at Bovada! 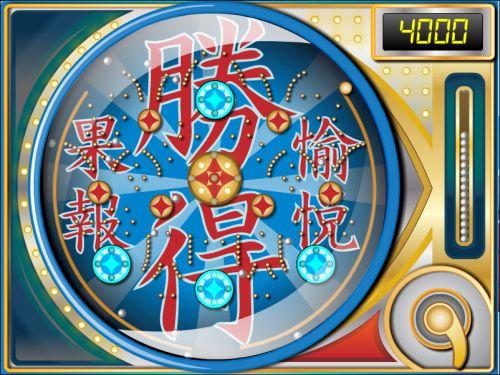 Only the highest win is paid per selected payline. All wins are multiplied by the bet per line, except for scatters. All wins pay left to right except for scatters (which pay any). Wild symbol will replace any other symbol (except scatters) to form a winning line, when possible.

Japan-O-Rama has an autoplay mode available for real money players only. To access it, press the “Auto” button. You can play from 1-500 autoplay spins, stop when your balance increases/decreases by $1-1000, stop on any win and set a delay between spins of 0-10. You can stop the autoplay mode on the Japan-O-Rama video slot at any time by pressing the “Stop” button.

With the latest few installments, Rival has simplified the iSlot. It sounds like a negative thing, but with some of the earlier ones, there was so much happening that we couldn’t see most slots players having the attention span to try for all of the many different special features. Japan-O-Rama doesn’t take long at all to get into the meat of things and we really appreciated that. You can play the Japan-O-Rama iSlot when you sign up and make a deposit at Bovada!

Where can players from the United States play the Japan-O-Rama slot game?

No, American players are no longer allowed to play at Rival online casinos. Instead, we suggest you check out a Top Game casino like Bovada for all your online gambling needs.

Where else can I play the Japan-O-Rama interactive slot machine?

For more Rival-powered casinos where you can find the Japan-O-Rama online slot, please read our list of Rival online casinos.

Where can I read more interactive slot reviews?

Is there a free Flash game of the Japan-O-Rama iSlot available?

You can play a free Flash game of the Japan-O-Rama video slot at Bovada. You can play for free or real money. If you have any issues with the Flash casino, make sure you have the latest version of Adobe Flash Player installed on your computer.

Alternative Ways To Ask/Incoming Search Traffic:
The answer to the question Japan-O-Rama ISlot Review is also applicable for the following questions: