Sudoku is a 9-row, 9-column casual game slot developed by Cryptologic, featuring a wild symbol, multipliers, a free spins feature and a re-spin feature. You can play the Sudoku casual game slot at Bovada.

The Sudoku slot game is based on the popular puzzle game of the same name. The Sudoku game is 9×9 grid filled with numbers. The objective is to fill the grid with numbers from 1-9 so that each column, row and box contains all of the numbers from 1-9. For a look at the Sudoku video slot from Wagerlogic, a screenshot has been provided below: 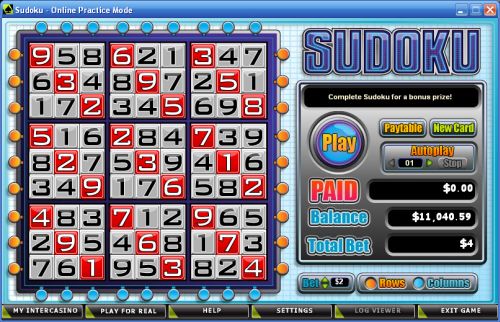 The Sudoku casino game is a dime slot. Bets on the Sudoku slot machine are $0.10, $0.25, $0.50, $1, $2, $5, $10 and $20 per side. You can select rows and/or columns to play. The maximum total bet on the Sudoku online slot game is $40 per game, giving all sorts of casino players a desirable betting range to play. You can generate new numbers by pressing the “New Card” button. To play the Sudoku slot game, select your bet and press the “Play” button. If a row or column has all of the numbers from 1 to 9 on it, the winning combination will be highlighted in red and flash. Completed squares will have a red border around them, but they do not pay out.

The Star symbol is the wild symbol on the Sudoku casual game slot. It will substitute for all numbers in the game. It comes in handy often, as you will frequently need that last number to complete a row or column, which the Star can count as.

Payouts are displayed on the Paytable. Wins are multiplied by the bet per row or column. Feature wins are added to row and column wins. Row and column wins are paid according to the number of complete individual rows or columns. The Star will substitute for all numbers, except during the Sudoku feature. A bonus is awarded for completing the entire Sudoku in the main game using Stars and/or red Sudoku numbers. Completed Squares will display a red border. Paying combinations will highlight and flash. For a look at the payout schedule on the Sudoku casual game slot, a screenshot of its paytable has been provided below: 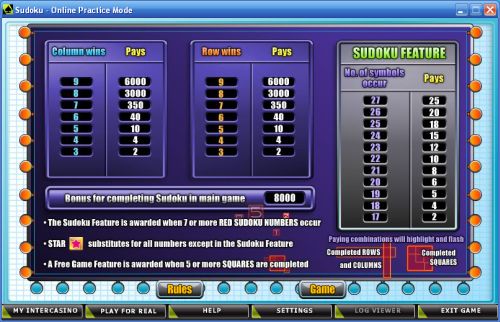 We know our fair share of Sudoku addicts and we can say that in its own way, the Sudoku slot game from Cryptologic is just as fun. It takes the classic puzzle game and puts it into the form of a video slot, which we all love. It’s also got some fun bonus features that you will not find on any puzzle we’ve ever seen. Put down your pencil and your Sudoku puzzle game and try the Sudoku slot game out today at Bovada!

Alternative Ways To Ask/Incoming Search Traffic:
The answer to the question Sudoku Casual Game Slot Review is also applicable for the following questions: